During the past month, petroleum refining companies have rallied: Shares of Valero Energy (NYSE:VLO) rose by nearly 3.8%. Based on the latest development in the oil market including the sharp rise in oil price, will shares of leading refining companies keep rising? Is the refinery industry heating up?

According the U.S Energy Information Administration, in the past several months refinery inputs are picking up. As of last week, refinery inputs reached 16.09 million barrels per day, which are nearly 2.7% above last year’s levels. The rise in the refinery inputs are likely to boost in the revenues of leading oil refinery companies such as Valero Energy and Western Refining (NYSE:WNR).

In previous months, the refinery outages may have adversely affected the revenues of major refineries, but the current expectations are that refinery inputs will keep increasing.

The chart below presents the developments in U.S refinery inputs and oil price during 2012 and 2013. 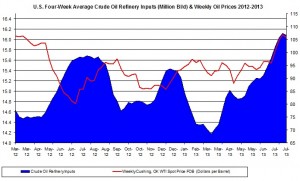 The rise in refinery inputs also coincided with the increase in oil price that is currently well above $100 per barrel. These two developments are likely to positively affect the revenues of major refineries.

Valero is still seeking growth and projects its capital expenditure in 2013 will reach $2.85 billion – so far the company’s capital expenditure was nearly $1.4 billion in the first half of 2013. In 2014 this provision is expected to reach between $2.5 and $3 billion.  These steps are likely to enable the company to reach growth in revenues in the coming years.

Moreover, the drop in profit margins was also partly due to the contraction in the price difference between Brent and WTI. The current price difference is around $2, which is likely to continue adversely affecting these companies’ profit margins in the coming quarters.  Here is an article that explains the potential adverse effect of narrower differentials on refining companies.

Western Refining’s revenues also declined by 1.6%. Moreover, the company’s operating profit also fell by more than 32% (year-over-year). The drop in operating profit was stemmed by the 3.9% decrease in total volume sold and the 25.7% tumble in refinery’s gross margin. In terms of investment, the company’s capital expenditures were 101.8 million in the first half of 2013 compared to only 59 million in the first half of 2012.  The sharp rise in capital expenditures is a positive sign for potential growth in operations in the future.

Marathon Petroleum (NYSE:MPC), unlike Valero or Western Refining, augmented its revenues in the second quarter of 2013: Its net sales rose by nearly 27%.  Despite the rise in revenues, its profit margins shrank from 6% to 4% in the second quarter. The spike in revenues was due to spike in total refinery throughputs of approximately 39%. The sharp rise in throughputs was mostly attributed to the Galveston Bay refinery, which was acquired on Feb. 1, 2013. If the company will continue to increase its operations by purchasing more refineries, this is likely to keep its revenues growing.

The company’s drop in profitability was due to the decrease in refining & marketing gross margin that plummeted by 44.5% (year-over-year).

But the ongoing rise in U.S refinery input and the recent increase in oil price are likely to pull up revenues of leading refining companies and may also improve their refining margin.

These companies continue to increase their dividend payments despite the drop in their profit margins. If these companies will continue at this direction, they are likely to make them more attractive as investments.

Is the price right?

Despite the rally of some of these oil refining companies, their current valuation is still low for the industry.  In the table below are these companies’ enterprise value and their EV-to-EBITDA ratio.

This calculation accounts for these companies’ financial structure and not just their earnings and market cap. The yearly EBITDA is based on the last four quarterly earnings reports. Based on the above, all three companies have a low EV-to-EBITDA ratio compared to the industry average. Their ratios are very close to one another so they suggest, at face value, these companies’ valuation isn’t high.

The contraction in the Brent-WTI might adversely affect the profitability of some refining companies. But the following factors suggest these refining companies will augment their revenues and profit margins: current high oil price, recovery in refinery inputs, and ongoing rise in capital expenditure. Finally, refineries’ reasonable dividend and they reasonable stock prices make these companies worth considering adding to your portfolio.

← Gold and Silver Prices – Daily Outlook for August 6
Will These Coal Companies Make a Comeback? →