The prices of coffee continue to trade down and many anticipate this downward trend will continue in the months to follow. Let’s examine the coffee market and see what should we expect is up ahead for this commodity.

The price of coffee has had a downward trend during most of 2012. The decline started somewhere around September 2011 after the volatility in the financial markets was high; this high volatility was not only in coffee but also in other commodities including gold and silver.

The chart below shows the development of the price of coffee ‘c’ future (short term delivery) between the years 2010 and 2012. It shows the downward trend of the coffee price in recent months. 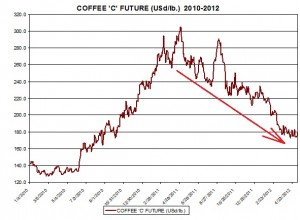 According to a recent review in Bloomberg

The recent fall in Euro/U.S Dollar could also be another factor in the downward trend of coffee price since the two indexes have a strong and positive correlation. The chart below show the development of the linear correlation between the two indexes’ percent changes in the past three months. It shows the linear correlation may have shifted but was mostly in the range between 0.3 and 0.5. This could mean if the downward trend of the Euro/USD will continue, it may also adversely affect the price of coffee. 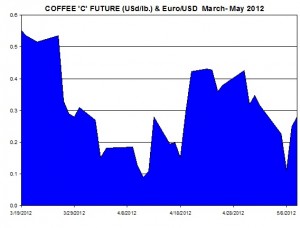 According to the ICO the total global consumption in 2011 is estimated to have reached 137.9 million bags, which will be nearly 1.7% growth compared with the previous year.  This means, assuming a 2% growth rate, the expected demand for coffee worldwide will reach 140.6 million bags in 2012.

According to the ICO the total production of 2012 season (the year starts in October 2011) will revolve around 134.1 million bags, which will be nearly 2.1% drop compared with the previous year. The total amount of green coffee inventories in importing countries is estimated at 19.1 million bags as of December 2011.

This means the current output is lower than the expected demand in 2012 and if not for the inventories the price of coffee would have risen.

Having said that, according to Bloomberg there expectations in the upcoming season for 2012/2013 the production will pick up and will outpace the demand by 5.3 million bags.

If the reports in the months to follow will confirm the expectations of a higher production level than demand, it could further pull down the price of coffee in the following weeks.