Oil prices (WTI and Brent) bounced back last week: WTI rose by 1.16%; Brent oil rallied by 2.67%. As a result, the spread of Brent oil over WTI expanded again; the premium ranged between $4.81 and $6.36. The drop in Libya’s oil exports may have partly contributed to the widening of this spread. According to the recent EIA weekly report, oil stockpiles rose by 2.1Mb. In the U.S, imports and production rose while refinery inputs fell during last week. Will oil keep rising next week? This week, several reports may affect the oil market. These items include: U.S’s manufacturing PMI, U.S employment report, and EIA oil weekly report.

Here is a weekly outlook and analysis for the crude oil market for September 2nd to 6th:

In the chart below are the changes in WTI and Brent oil prices in recent months (prices are normalized to January 31st). As seen in the chart herein, the oil slightly increased during the month. 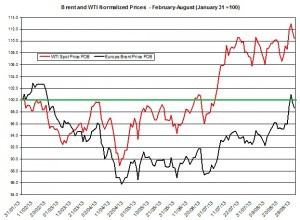 The spread between Brent and WTI oil expanded again last week as it ranged between $4.81 and $6.36 per barrel. Moreover, during the week, the premium grew by 37.66%.  This rally may have partly stemmed by the latest developments in Libya. 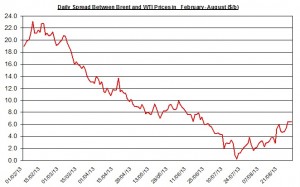 The oil stockpiles changed direction and rose by 2.1 MB and reached 1,815.45 million barrels. The linear correlation between the shifts in stockpiles has remained stable at -0.202: this correlation implies that oil price, assuming all things equal, will fall next week.

Oil imports to the U.S changed direction and rallied by 0.6% last week. The weekly shifts in oil imports have a mid-strong negative correlation (-0.270) that implies oil price may decline next week. Moreover, oil production also inched up; refinery inputs, on the other hand, decreased again by 0.3% last week. In total, the rise in production and imports might loosen the U.S oil market.

The next weekly update will be published on Wednesday, September 4thand will pertain to the week ending on August 30th.

The main focus in the Middle East has shifted from the ongoing riots in Egypt to the potential intervention of U.S in the turmoil in Syria. This potential intervention may ignite the region, which may adversely affect the oil market. I still think these concerns about the potential escalation in these countries are the main cause behind the recent rise in oil prices. Some analysts have pointed out that Libya’s oil exports have substantially declined in recent months. Some think the current production is only 150k of barrels a day – in 2010 this country produced 1.6 million barrels a day. According to the August OPEC report, Libya’s exports fell by 70% and its production decreased to 1,062k barrels a day. If Libya’s oil exports remain low, it could keep Brent oil price above $110 and the spread between Brent and WTI closer to the $10 mark. Libya’s oil production accounts for roughly (when it produces 1.6M bbl/d) 5% of OPEC’s total production. Considering the tight oil market, such a decline could keep oil prices elevated.

Tuesday – U.S. Manufacturing PMI: This report will pertain to August 2013. In July, the index sharply rose to 55.4%; this means the manufacturing is expanding; this index may affect foreign exchange rates, crude oil market;

Friday – U.S. Non-Farm Payroll Report: in the recent employment report for July 2013, the labor market slightly rose: The number of non-farm payroll employment rose by 162k – lower than the number many had anticipated; the U.S unemployment rate slipped to 7.4%; if in the upcoming report the employment will increase again by over 150 thousand (in additional jobs), this may pull up the price of oil;

From the supply side, the rise in production and imports could pressure down oil price. Conversely, the decline in refinery inputs may curb this fall. The U.S oil storage rose last week; this serves as a signal for a rise in supply or a decline in demand; this, in turn, may suggest the U.S oil market has slightly loosened. The ongoing turmoil in the Middle East and the drop in Libya’s oil exports could keep the price of oil from plummeting. From the demand side, the upcoming reports including U.S payroll report, and U.S’s manufacturing PMI could signal the potential progress in demand for oil in U.S. If these reports will surpass current market expectations, they could positively affect the price of oil. Finally, the slight increase in the spread between Brent and WTI may continue if Libya’s oil exports will remain low.

The bottom line, on a weekly scale I guess oil price might keep rising.