There are many analysts who consider crude oil price as a good indictor for changes in the stock market trend such as the S&P500.

There are three reasons to question this paradigm:

In the following graph is the S&P 500 and oil normalized prices, in which 100=January 1998. The chart doesn’t show any apparent relation between the two. This is probably because each index has different variables that affect them. 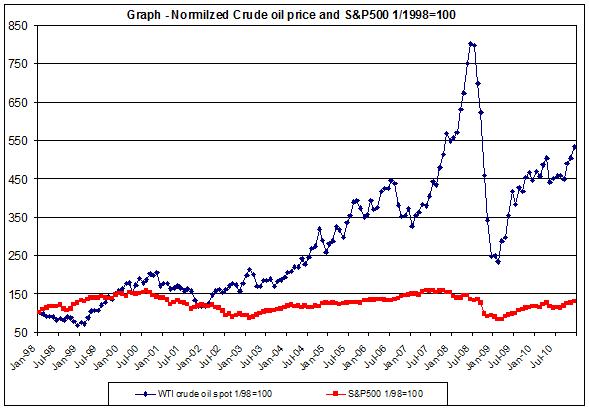 2.       Inconsistence correlation: even if you might consider a nearly 15% correlation as “good enough”, you will be surprised to notice that the relation between crude oil price and S&P 500 (M-2-M percent change) isn’t consistent: in the following chart is the level of correlation M-2-M percent change broken down into years. The chart shows that during 2003-2006 there was a strong negative correlation, while during recent years (2007-2010) there was a strong positive correlation. Despite the recent strong correlation, it could easily switch back into a negative one, and therefore it wouldn’t be prudent to rely on it. 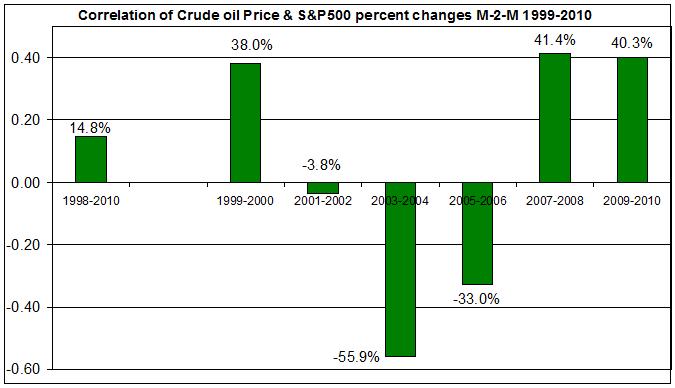 3. Level of Volatility: In the crude oil price and S&P500 chart above there is no apparent trend between the two. Furthermore, each index has different volatility: crude oil price M-2-M percent change std. is 8.8% during 1998-2010, while S&P500 std. is 4.2%, i.e. nearly half the volatility. Therefore, relying on an index (crude oil price), which is nearly twice as volatile as the other index (S&P500), which you want to predict, doesn’t coincide.

I think that we will need to rely only on correlations that proven to be consistent and series that are similar to one another before we can make speculative inferences.