Crude oil prices bounced back and trimmed part of the falls they had recorded in recent days. Today, the Canadian and American trade balance reports will be published, ECB monthly bulletin, EIA natural gas report and US unemployment claims, Yesterday, the IEA trimmed down its projection for crude oil demand; according to yesterday’s  EIA report,  the US crude oil stockpiles fell last week by over 10.7 million bbl.

Here’s a short analysis and outlook of the crude oil market for today, August 11th:

The chart below presents the prices of WTI spot oil and Brent oil during July and August. It shows the sharp falls of crude oil prices during August. 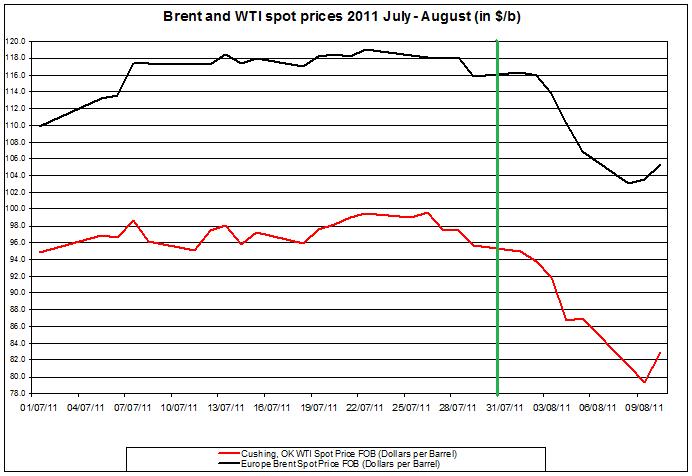 The premium of Brent oil over WTI spot oil declined yesterday August 10th to $22.47/b; during August this premium rose by 10.96%, mainly because WTI spot oil price declined at a sharper rate than Brent oil price did. This finding suggests that the crude oil market in Europe is still tighter than in the US.

The S&P500 along with other stock indexes fell sharply yesterday by 4.4%; if the stock market will resume its downward trend it may further pull down major energy commodities prices including crude oil prices. The correlation between oil prices and S&P500 isn’t reliable but in August so far it was strong; the chart below shows the price development of the S&P500 index with crude oil prices. 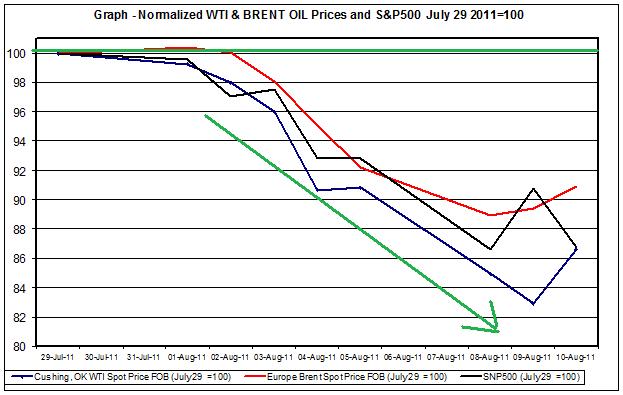 IEA updated the global demand for oil in 2011

According to the recent IEA report the global oil demand projections slightly declined by 0.1 mb/d on average to 89.5 mb/d in 2011 (see here full IEA report).

On Wednesday, Euro to US dollar exchange rate declined by 1.38%; the US dollar to Canadian dollar sharply rose by 1.80%; the Australian dollar to US dollar fell by 1.70%. This means that US dollar very sharply appreciated against major currencies; this direction isn’t inline with the rises of crude oil prices, but there is a high volatility in the financial markets the major currencies are zigzagging with no clear     direction; in any case, if the US dollar will depreciate it’s likely to drive crude oil prices up.

For the Canadian trade balance regarding May 2011, exports increased by 1.2%, and imports by 1.1%; as a result, the trade deficit narrowed from $857 million in April to $814 million in May; if this trend will continue it may indicate a growth in the Canadian economy.

On the other hand, the American trade balance report for May 2011 showed the goods deficit increased by $6.7 billion compared to April 2011 and reached $64.9 billion; the service surplus rose by only $0.1 billion to $14.7 billion; as a result, the goods and services deficit increased by $6.6 billion to $50.2 billion; if this trend will continue it may indicate a slowdown in the growth of the American economy.

Crude oil prices have declined very sharply in the last few days, so the sharp rise from yesterday is probably more of a correction than a change in direction. There is still uncertainty in the financial markets that could spark an additional drop in stock markets that will affect crude oil prices to trade down as well. It’s not likely that oil prices will bounce back to the high price levels they were back in July because the oil market, at least in the US, is further loosening up and the oil demand is projected to be slightly lower than expected.  I speculate crude oil prices  will settle around the $80-$85 mark for WTI spot oil and $100-$107 for Brent oil.