The Prices of crude oil tumble down on today’s trading perhaps on account of the recent EIA report in which it was mentioned the oil production in the U.S continued to rise. According to the recent petroleum and oil weekly report published by the Energy Information Administration, there is an analysis on the ongoing growth of oil production since 2008.  During last week there was a decline in the U.S stockpiles: the total U.S oil and petroleum stockpiles decline by 2.4 million bl; further, crude oil stockpiles also decreased by 0.48 million bl. Alternatively,  there was a rise in refinery inputs, imports and production. Finally, the prices of gasoline and diesel in the U.S decreased during last week. Currently, the price of oil is tumbling down.

Here is a weekly review for the week ending on September 28th 2012 of the U.S oil and petroleum market:

The chart below presents the changes of petroleum and oil stockpiles and WTI crude oil price between 2008 and 2012. During the last couple of years the lagged linear correlation between WTI oil price and current oil stockpiles was -0.183. This relation suggests, assuming all things equal, that oil prices may rally during next week. 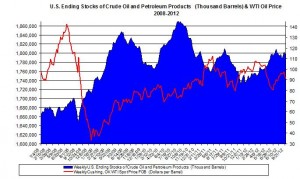 The four week average of U.S. production (million of barrels a day) for the week of September 28th increased to 6.208; it is also 10.9% above the average production at the same week in 2011; the linear relation between the change in U.S production (lagged by one week) and the changes in price of oil is mid-strong and negative at -0.37; this relation suggests that the rise in production is pulling down the current oil prices.

Below is a detailed review of the information listed above (for the week of September 28th):

Crude Oil, Gasoline and Diesel Prices for the Week Ending on September 28th

The national average Diesel price also declined by a penny as it reached $4.08/g; this price is also $0.33/g higher than last year’s average price at same time.

A detailed analysis of oil prices for the week ending on September 28th is herein.