In this week’s petroleum and oil weekly update prepared by the Energy Information Administration, there is an analysis of the developments in the West Coast gasoline markets which should bring some relief to the currently high gasoline prices. The total U.S oil stockpiles slightly increased during last week by 1 million bl. There was also a rise in production and refinery inputs. This build up in stockpiles coincides with the ongoing fall in crude oil prices. Finally, the prices of gasoline and diesel in the U.S also decreased during last week.

Here is a weekly overview for the week ending on May 18th 2012 of the U.S oil and petroleum market:

On the other hand, U.S. Ending Stocks of Total Gasoline declined by 1.61% compared with last week’s stocks; it reached 201.01 million barrels.

The chart below presents the recent changes in petroleum and oil stockpiles and WTI crude oil price between the years 2010 and 2012. During the past years the lagged linear correlation between WTI oil price and current oil stockpiles settled at -0.159. 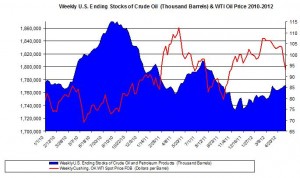 Petroleum production and imports (for the week of May 18th)

During last week refinery inputs and oil production rose while imports edged down.

Below is a detailed recap of the information listed above (for the week of May 18th):

Oil, Gasoline and Diesel Prices for the Week Ending on May 18th

The national average Diesel price also fell again by more than 5 cent to $3.96/g, which is $0.04/g below last year’s average price at same time.

A detailed analysis of oil prices for the week ending on May 18th is herein.