According to the latest petroleum and oil weekly report prepared by the Energy Information Administration, there is an analysis on the consumption in gasoline which has remained nearly unchanged in recent years. During last week there was a decline in the U.S stockpiles: the total U.S oil and petroleum stockpiles fell by 9.6 million bl; further, crude oil stockpiles also decreased by 7.4 million bl. There was a decline in refinery inputs, production and imports. This decline is most likely due to the effect of Hurricane Isaac that caused a shutdown in many refineries in the Gulf of Mexico. Finally, the prices of gasoline and diesel in the U.S increased again during last week.

Here is a weekly overview for the week ending on August 31st 2012 of the U.S oil and petroleum market:

The chart below presents the changes of petroleum and oil stockpiles and WTI crude oil price between the years 2008 and 2012. During the last couple of years the lagged linear correlation between WTI oil price and current oil stockpiles was -0.177. 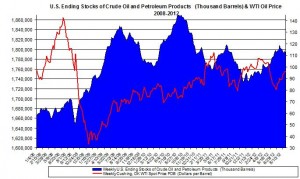 During last week imports refinery inputs and production declined. This decline was most likely due to the impact of Hurricane Isaac.

The four week average of U.S. production (million of barrels a day) for the week of August 31st decreased to 6.043; it is still 7.9% above the average production at the same week in 2011;

Below is a detailed review of the information listed above (for the week of August 31st):

Crude Oil, Gasoline and Diesel Prices for the Week Ending on August 31st

A detailed analysis of oil prices for the week ending on August 31st is herein.