The Prices of crude oil declined during most of the week so far. The latest EIA update shows the oil stockpiles decreased in the U.S during last week. The petroleum and oil weekly update by Energy Information Administration shows an analysis on the effect of Hurricane Sandy on the oil market: the main problems revolve around the damage done to the New York Area pipelines and terminals that caused stress on the supply chain between wholesale and retail segments. During last week U.S stockpiles fell: the total U.S oil and petroleum stockpiles declined by 4.7 million bl; conversely, crude oil stockpiles rose by 1.1 million bl. The oil production rose again last week while imports and refinery input fell.

Here is a weekly update for the week ending on November 9th 2012 of the U.S oil and petroleum market:

In the chart below are the changes of petroleum and oil stockpiles and WTI crude oil price in past years. During the last couple of years the lagged linear correlation between WTI oil price and current oil stockpiles was -0.186. This correlation suggests, assuming all things equal, oil prices may increase during next week. 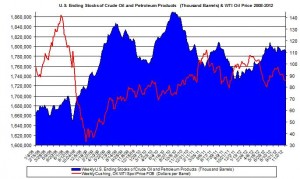 The four week average of U.S. production (million of barrels a day) for the week of November 9th rose to 6.666; it is also 0.4% above the average production at the same week in 2011.

Below is a detailed review of the information listed above (for the week of November 9th): 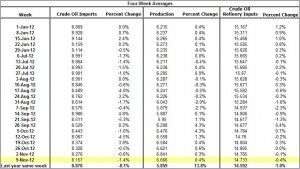 Crude Oil, Gasoline and Diesel Prices for the Week Ending on November 9th

A detailed analysis of oil prices for the week ending on November 9th is herein.