In this week’s petroleum and oil weekly update done the Energy Information Administration, it was stated that the current crude oil inventories located at the Cushing, Oklahoma storage hub are at a record high levels of 45.1 million barrels. The total U.S oil stockpiles slightly rose during the previous week by 2.8 million bl. There was also an increase in imports, production and refinery inputs. This build up in stockpiles coincides with the descent of crude oil prices. Finally, the prices of gasoline and diesel in the U.S also declined during last week.

Here is a weekly recap for the week ending on May 11th 2012 of the U.S crude oil and petroleum market:

On the other hand, U.S. Ending Stocks of Total Gasoline fell by 1.35% compared with last week’s stocks; it reached 204.3 million barrels.

The chart below shows the recent developments in petroleum and oil stockpiles and WTI crude oil price between the years 2010 and 2012. During the past couple of years the lagged linear correlation between WTI oil price and current oil stockpiles remained at -0.152. 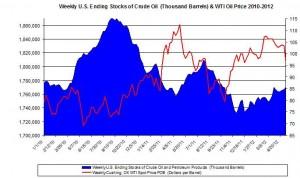 Petroleum production and imports (for the week of May 11th)

Below is a detailed recap of the information listed above (for the week of May 11th):

Crude Oil, Gasoline and Diesel Prices for the Week Ending on May 11th

The national average Diesel price also fell again by 5 cent to $4.00/g, which is $0.06/g below last year’s average price at same time.

A detailed analysis of crude oil prices for the week ending on May 11th is herein.