The Goldman Sachs effect is still upon the oil market and oil prices fell yesterday for the second straight day. As a result, WTI price reached its lowest level this month. Will this downward trend continue?

Let’s examine the main news for today, April 13th that might affect the crude oil markets. 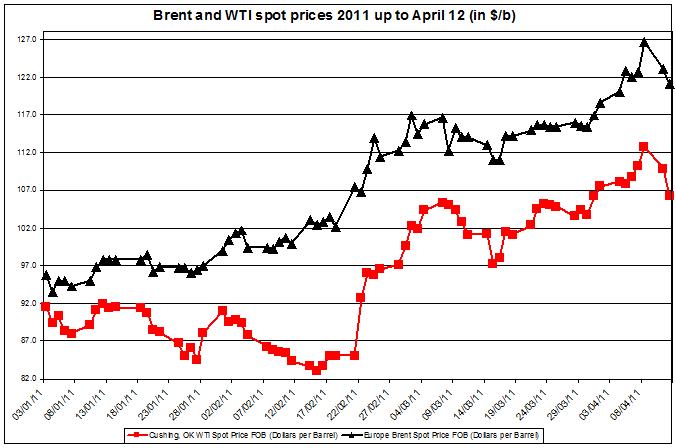 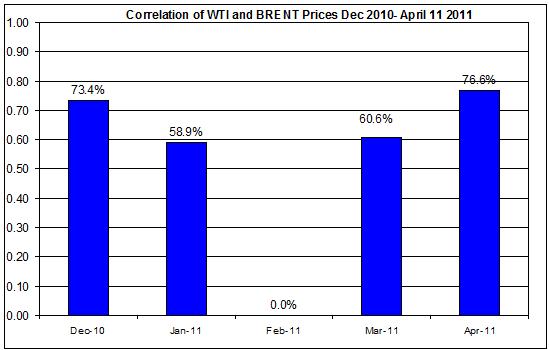 The recent drop in oil prices might also be related to the reduced expectations of oil demand:

That being said, it was recently reported that Saudi Arabia might decrease its oil production in April by 0.5 mbl/d because of low demand for oil. This drop might also be related to the tsunami that hit Japan during March: Japan one of the biggest importers of crude oil, and most of it (over 80%) comes from the Middle East, decreased its oil imports during the first few weeks after the tsunami, which might explain one reason for the drop in oil demand the Saudis see. Will this trend last? Not according to IEA recent report:

According to the latest IEA report, the oil demand in 2011 will remain unchanged, as Japan is expected to raise its demand for oil in the months to come. On the other hand, high oil prices will curb the growth rate of oil demand.

The fighting between the rebels and Qaddafi’s troops continue however there is news that the rebels were able to sell crude oil via Qatar, earlier this month.

The EIA will publish its weekly report on petroleum stocks: According to Bloomberg the expectations are that US crude oil stocks inclined by 1.19 million barrels. In the previous report, US petroleum didn’t change much this week and remained at 1,768 million barrels (For the previous petroleum report, see here).

Major oil prices are traded in the European markets with mixed trends:

The recent cool down of oil prices might continue for the next several days, however it will be at much more moderate rate than it did in the past couple of days.

Despite the drop in oil prices, the uncertainty in the Middle East is still high and  until the uncertainty will clear up, crude oil prices will remain high; in the short term, all things being equal, they will show moderate fluctuations, with a moderate downward  trend as the week will progress.

Difference between Brent oil and WTI spread: as of yesterday, April 12th, the premium of Brent oil over WTI has inclined to 14.79$/b – the widest gap this month so far.

The premium will remain around the 10 and 15$/b in the near future, as it has been in the past month as seen in the chart below: 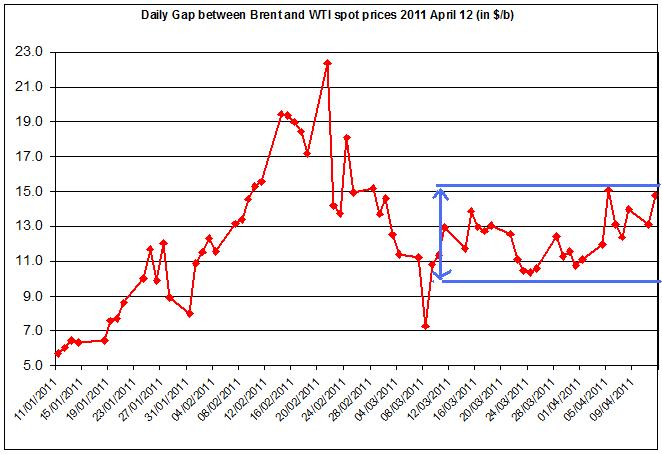