Oil prices finished yesterday with high rises, after they haven’t shown much of change in the last couple of months. Let’s try and figure out what is installed for us today.

Here are main news items for today, April 21s that might affect the crude oil market:

During April, up to April 20th, WTI crude oil moderately inclined by 3.1%, while Brent oil rose by 4.5%. These figures are mostly affected by the price hike of WTI and BRENT oil from yesterday. 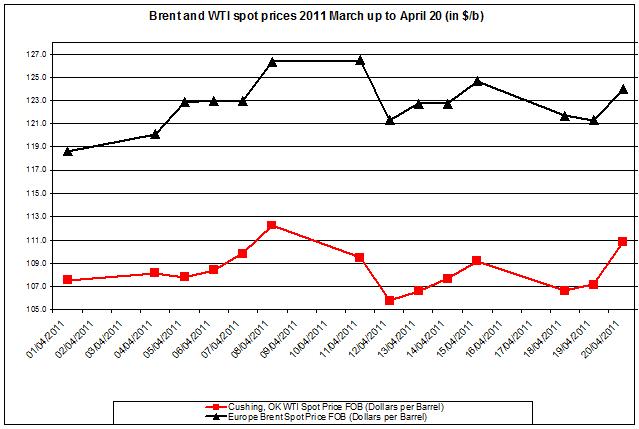 There is still high correlation between the daily percent changes of Brent oil and WTI spot price as seen in the chart below: 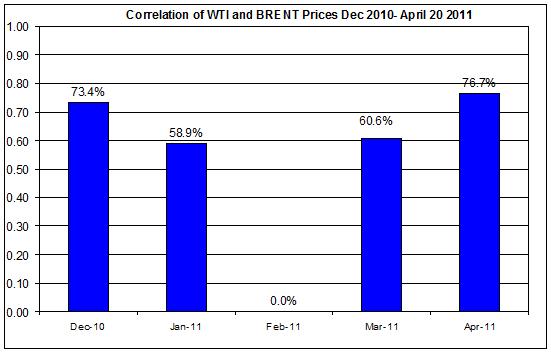 Notice of the chart below of the correlations of the daily percent changes between USD/BRL and oil prices (WTI and Brent): it shows that during April there has been a strong negative correlation between oil prices and the USD/BRL exchange rate. During April (so far) the correlations are at 0.881 for WTI oil and 0.665 for Brent oil. This might be just a correlation (after all correlation doesn’t imply causation), however it might also be that Brazil stepped up in its oil exports during last month. 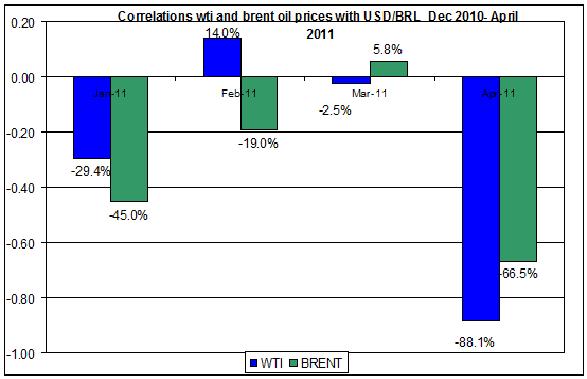 The EIA published yesterday its weekly report on petroleum stocks: According to its report, US petroleum stocks declined by 6.7 million barrels, which is a 0.38% drop compared to the previous week. For the week ending on April 15th the stocks reached 1,757.2 million barrels. (For the full petroleum report review and analysis, see here). 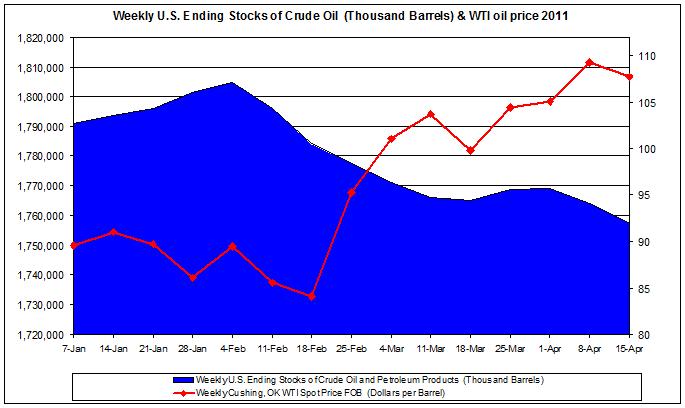 According to BBC, the rebels have managed to capture the Wazin crossing. The rebels currently control much of the eastern Libya.

Libya’s oil production was once at 1.6 million barrels per day before the Libyan war began back in February 2011; since then it has declined by nearly 1.3 million bbl/d.

The recent reports from Nigeria are that at least 121 people were killed in violent riots following the Nigerian elections, in which Jonathan won and was re-elected as Nigeria’s president.

Major oil prices are currently traded in the US markets with moderate rises:

Crude oil prices showed yesterday some major rises that broke the recent “no trend” pattern they were at in the last couple of weeks.  This recent change might be related to some of the news listed above, however for now, oil prices continue with moderate rises as they did before yesterday.

Therefore I still speculate that WTI oil price will continue to increase moderately along with Brent oil, and might continue to slowly close the gap between the two prices. Furthermore, crude oil prices might remain at a high level, but in the mid to long term will eventually come down, once the uncertainty around the supply of oil will dissipate.

Difference between Brent oil and WTI spread: as of yesterday, April 20th, the premium of Brent oil over WTI declined to 13.08$/b.

The premium of Brent oil over WTI started to drop in the last week after it had an upward trend at the first couple of weeks of April (as seen in the chart below). It’s still early to conclude if this recent decline will be the start of the closing of the gap between these two energy prices, however for now, I speculate that the premium might continue to moderately decline and range between 11 and 14 USD during the rest of the week. 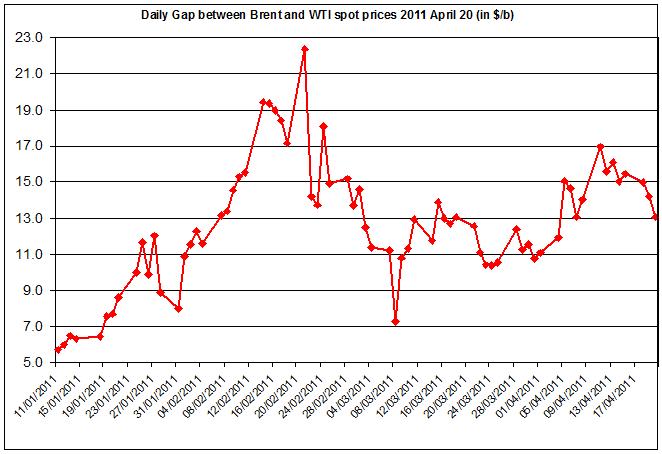