Let’s examine the oil market for the last day of the week as current crude oil prices are traded with moderate rises.

Up to yesterday, April 28th, WTI spot oil inclined by 4.94%, and Brent oil rose by 5.08% as seen in the chart below. Yesterday, WTI rose very moderately while Brent oil declined. 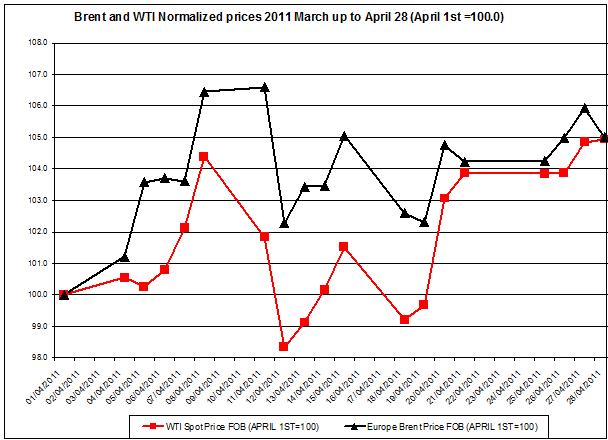 The ongoing concerns around the recovery of the US economy are one of the prime news items, besides of course the British royal wedding, that is affecting the perspective of traders in the major commodities markets and currencies.

Ben Bernanke is set to talk today about Community Development in Challenging Times. He will probably also update about the progress of the Fed’s stimulus plan and the recent report about the US GDP growth rate in first quarter.

According to Bloomberg, China may need to find ways to increase its energy output because at the current growth rate, China will not be able to meet the growing demand for electricity. This might mean that there will be power shortage in the upcoming summer. Since the current oil prices are very high, China may need to fall back on coal and natural gas, two energy commodities that their prices are also on the rise.

According to Bloomberg, the rebels in Libya are trying to take control over the western boarder crossing into Tunisia and ward off the advancements of Qaddafi’s forces.

Following the announcement that President Ali Abdullah Saleh is step down from his Presidency within a month in exchange for immunity against any future prosecution, the opposition may accept Saleh’s condition. Currently there are still reports of violence and killing of protestors.

Following the violent protests in which at least 400 people were died from confrontations between the Syrian army and civilian protestors, the sanction are starting to come from UK, US and other leading countries calling to stop the violence and bloodshed. The protestors call against the current President of Syria Bashar al-Assad.

Major oil prices are currently traded in the European markets with moderate rises:

I still speculate that WTI oil price will continue to increase but very moderately along with Brent oil; Furthermore, crude oil prices might remain at a high level, but in the mid to long term will eventually come down, once the uncertainty around the supply of oil will dissipate.

The premium of Brent oil over WTI continue to bounce around the 11-12 USD range as it did in the past week. For now I speculate that the premium might continue to moderately decline but will remain around a double figure gap ranging between 11 and 13 USD.