The prices of oil (both WTI and Brent) declined again during most of last week: WTI decreased by 1.52%; Brent oil, by 0.97%. As a result, the gap between the Brent oil and WTI contracted again to its lowest level since July 2012; the gap between Brent and WTI ranged between $10 and $12. OPEC and IEA monthly reports came out last week. They showed the global supply is stable while the demand is weak. According to the latest EIA report, oil stockpiles rose by 5.9Mb. Moreover, imports, production and refinery inputs also rose again during last week. The rise in oil supply may have also dragged down the prices of oil. Will oil continue to fall next week? During next week, several publications may affect the oil market. These items include: U.S Philly Fed index, China’s GDP for Q1 2013, U.S industrial production, and EIA oil weekly report.

Here is a weekly outlook and analysis for the crude oil market for April 15th to April 19th:

In the chart below are the shifts in WTI and Brent oil prices during February-April (rates are normalized to January 31st). As seen below, the prices of oil have declined in recent weeks. 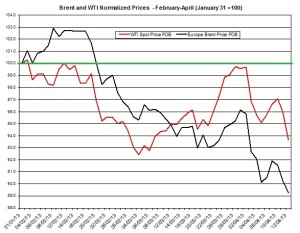 Premium of Brent over WTI – April

The difference between Brent oil and WTI spot oil has contracted again during last week as it ranged between $10 and $12 per barrel. During April, the premium declined by 7.58%. 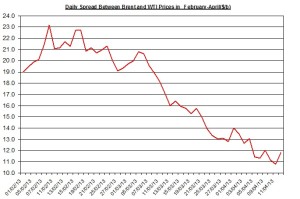 The oil stockpiles bounced back and rose by 5.9 MB and reached 1,779.1 million barrels. The linear correlation between the changes in stockpiles remained mid-strong and negative: this correlation suggests that the price of oil, assuming all things equal, will fall again next week.

Moreover, the oil imports to the U.S also increased again by 0.6% last week. The weekly shifts in oil imports have a mid-strong negative relation (-0.33) that implies oil prices may fall next week. In other words, the rise in imports suggests the supply rose and thus may loosen the oil market in the U.S.

The next weekly report will come out on Wednesday, April 17th and will pertain to the week ending on April 12th.

Monday – China First Quarter GDP 2013: if the growth rate of China’s GDP will be lower than in the previous quarter it might adversely affect the price of oil;

Thursday – Philly Fed Manufacturing Index: This monthly survey presents an estimate for the growth of the US manufacturing sectors. In the latest March survey, the growth rate changed course and rose from -12.5 in February to 2.0 in March;

According to the recent OPEC Report, OPEC’s oil production edged down by 99.6 thousand bbl/d to reach 30,193 in March. This news suggests the oil supply has slightly declined during last month, which could have tightened the oil market in recent weeks. If this trend will continue, it could further pressure up the price of oil.

These figures suggest the supply is slowly growing while the demand isn’t progressing. If the demand will contract, this could also pull down the price of oil.

During last week, the EURO/USD increased by 0.94%. Moreover, the AUD/USD also increased by 1.20% during last week. The correlations among these currencies pairs (Euro/USD) and oil prices sharply weakened. E.g. the linear correlation between the price of oil and EURO /USD was only 0.06 during March/April. Nonetheless, if the U.S dollar will continue to weaken against “risk currencies”, this may pull up oil prices.

From the supply side, the rise in oil imports, refinery inputs and production in the U.S might pull down oil prices. The rise in storage is another indication for a rise in supply. The recent OPEC report didn’t show much change in OPEC’s oil production. The IEA update showed the global oil supply is expected to slightly rise, while the demand isn’t growing much. This report may have contributed to last week’s tumble in the price of oil. From the demand side, the latest U.S reports, including the retail sales monthly update, show a drop in demand. The upcoming reports regarding the U.S and China might provide an update to the expected developments from demand side.  If the reports will show lower than expected growth, they could pull down the prices of oil from the demand side. The difference between Brent and WTI oil ranged between $10 and $12 and might continue to slowly contract in the coming days as the US economy is slowly recovering (WTI oil) while the EU economy (Brent oil) isn’t growing. Finally, if major currencies such as the EURO and Aussie will appreciate against the U.S. dollar, they may curb the decline in oil prices. The bottom line, I guess the prices of oil will slightly contract next week.

← Is Natural Gas Heading to a New High?
Gold and Silver Prices Outlook for April 15-19 →