Crude oil prices traded up during most of the week; the gap between Brent and WTI also grew. The recent OPEC monthly report revealed a slight decline in the oil production of Iran but the overall OPEC oil production didn’t change much. During last week, WTI oil rose by 1.61%; Brent oil, by 3.68%.

During the upcoming week there are several publications that may affect oil market including the American retail sales, EU GDP, Canada’s CPI and Philly Fed index.

Here is a weekly outlook and analysis of the crude oil market for August 13th to August 17th:

In the chart below are the developments in WTI and Brent oil prices during August (prices are normalized to July 31st). It show how both oil prices rose during the past couple of weeks.

Premium of Brent over WTI – August

The difference between Brent oil and WTI spot oil grew to $18-$20 per barrel range. During August the premium rose by 15.84%. 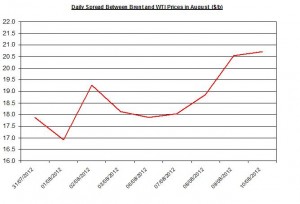 The oil stockpiles changed direction and declined during the previous week by 1 M bl to reach 1,800.3 million barrels. The upcoming report will be published on Wednesday, August 15th and will refer to the week ending on August 10th.

IEA Revised Down its Projection to Oil Demand

Tuesday – Euro Area GDP 2Q2012 Report: Euro Stat will also publish the GDP growth rate of the Euro Area. According to the previous report, during the first quarter of 2012, the Euro Area GDP didn’t grow (Q-o-Q). This news might affect the Euro; the current expectations are of another a low growth rate or even another contraction for the second quarter;

Tuesday –U.S. Retail Sales Report: in the recent report regarding June, the retail sales declined by 0.5% from the previous month; gasoline stations sales decreased by 1.8% in June compared to May; this report could signal the changes in U.S’s gasoline demand and thus may affect crude oil prices;

Thursday – Philly Fed Manufacturing Index: This monthly survey measures the manufacturing conditions. In the previous July survey, the growth rate rose from -12.9 in July to -16.6 in June 2012. If the index will remain negative it may adversely affect not only U.S Dollar but also commodities prices (the recent Philly Fed review);

The EURO/USD exchange rate declined again last week by 0.78%; on the other hand, the AUD/USD also rose by 0.08%. There are still positive relations among these currencies pairs (EURO/USD, AUD/USD) and crude oil rate. E.g. the linear correlation between the oil price and Euro/USD is 0.56 during July/August. If the U.S dollar will depreciate against the EURO and Aussie dollar, it may positively affect oil prices.

The difference between Brent and WTI oil further expended during last week and may continue on this path during the upcoming week. The upcoming U.S reports including retail sales and Philly Fed index could also affect oil rates. The upcoming EU reports such as GDP for Q2 2012 could also affect crude oil prices. From the supply side, the tensions between U.S and Iran could reduce Iran’s oil production, which could further pressure up oil rates. Finally, if major currencies including EURO and Aussie dollar will rise against the U.S. dollar, then they might also push up oil prices.