Here is a weekly outlook and analysis for the oil market for December 23rd to December 27th:

In the chart below are the daily changes in WTI and Brent oil prices during the past several months (prices are normalized to January 31st). As seen below, Brent and WTI oil prices rallied last week. 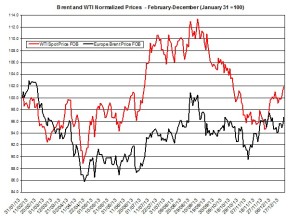 Premium of Brent over WTI – December 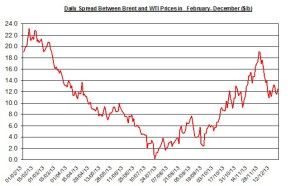 The oil stockpiles fell again by 12.6 MB and reached 1,769.2 million barrels. The linear correlation between the changes in stockpiles has remained stable at -0.202: this correlation suggests that oil price, assuming all things equal, may further increase next week. But in order to better understand the fundamentals let’s examine the developments in supply and demand:

Demand: Refinery inputs rose again by 0.8% last week. In total, the demand was higher than the supply. Thus due to the sharp rise in demand and the drop in supply, the gap between supply and demand further widened. This gap may pull up oil prices as the U.S oil market continues to tighten.

If U.S oil market continues to tighten, as it did in the past several weeks, this could further pressure up oil price.

The next weekly report will be released on Friday, December 27th and will refer to the week ending on December 20th.

Monday – Canada’s GDP by Industry: This monthly report presents the developments in major industrial sectors for October 2013. In the last update regarding September 2013, the real gross domestic product inched up by 0.3%. This report may affect the Canadian dollar, which is strongly correlated with commodities prices such as oil and gold;

Tuesday – U.S Core Durable Goods: This monthly report regarding November may indirectly indicate the changes in U.S. demand for commodities such as oil and gas. As of October 2013, new orders of manufactured durable goods fell to $486.9 billion; if this report shows another drop in new orders, then it could drag down not only the USD but also commodities;

From the supply side, the drop in imports is likely to further pull up oil prices. On the other hand, the ongoing rise in production could pressure down oil prices. In total, the supply contracted last week. From the demand side, refinery inputs rose again. As a result, the storage declined again. Further, the gap between supply and demand has widened so that the demand is much higher than the supply; this could imply the oil market has tightened again. Looking forward, the upcoming reports regarding U.S could offer some additional insight regarding the developments in this country. The gap between Brent and WTI ranged between $11 and $13 range. The tight oil market in the U.S is likely to pull up the WTI closer to the Brent oil. On the other hand, if the USD continues to strengthen, this could adversely affect oil price. The upcoming Christmas week is likely to experience low volatility as it did in previous years.

The bottom line, on a weekly scale, I guess oil price may remain with little movement.