Crude oil prices continued to dwindle during the first part of the week but by the end of the week oil, much like other commodities, hiked on account of the recent surprise resolution of the EU Summit. Will this recovery hold up or will oil prices change direction and tumble down? Despite the nearly 10% hike in WTI oil price on Friday, it finished the month 1.81% below its initial level. Brent oil, much like WTI, also finished the month rising by 6.12% but on a monthly scale declined by 4.98%.

During the upcoming week there are several reports that may affect oil rates including the U.S non-farm payroll report, U.S manufacturing PMI survey, ECB rate decision and U.S jobless claims.

Here is an outlook and a weekly analysis on the crude oil market for July 2nd to July 6th:

In the chart below are the changes in WTI and Brent oil prices during the month (prices are normalized to May 31st). It show how both oil prices have had a downward trend during most of June (UTD) and by the last day of the month they both bounced back. 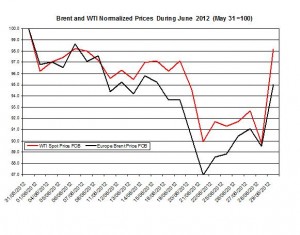 Premium of Brent over WTI – June/July

The gap between Brent oil and WTI spot oil rose to $12-$13 per barrel range. During June the premium declined by 22.57%. 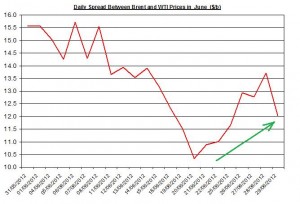 The standard deviations of both WTI and Brent oil prices started to pick up in June but they are still lower than they were high back in May. This means the volatility of both energy prices is lower than before but is starting to rise. 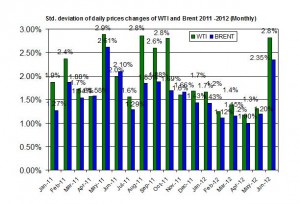 The upcoming report will be published on Thursday, July 5th and will refer to the week ending on June 29th.

Monday –U.S. ISM Manufacturing PMI: During May 2012 the index declined to 53.5%, which means the manufacturing is growing at a slower rate; this index might affect forex, and oil markets;

Tuesday – U.S Factory Orders: this report will offer some insight to the growth of the U.S economy and could affect the direction of the U.S dollar;

Thursday –ECB Press Conference and Euro Rate Decision: In previous interest rate decision the President of ECB, Mario Draghi kept the EU interest rate flat at 1%; the recent EU Summit decision to bailout struggling banks by the rescue fund might affect ECB’s rate decision; the ongoing decline in inflation rate and low growth in EU is likely to keep the option of another rate cut on the table;

Thursday – U.S. Jobless Claims:  in the latest report the jobless claims edged down by 6k to 386,000; this upcoming weekly report may affect energy commodities rates;

Friday – U.S. Non-Farm Payroll Report: in the recent report regarding May 2012, the labor market didn’t grow much as it did during the first quarter as the number of non-farm payroll employment increased by only 69k; if the upcoming report will continue to show low growth around 100 thousand mark (in additional jobs), this may affect adversely affect not only the USD, but also oil prices (see here previous U.S employment report).

The EURO/USD exchange rate rose last week by 0.76%. Furthermore, the AUD/USD also increased by 1.73%. There are still positive relations among these foreign exchange rates (EURO/USD, AUD/USD) and crude oil rate. E.g. the linear correlation between the oil price and Euro/USD is 0.69 in the past month. If the U.S dollar will continue to depreciate against the EURO and Aussie dollar, it may further pull up oil prices.

The Brent premium over WTI oil rose during last week but may resume its downward trend especially if the U.S economy won’t shows signs of growth. The EU Summit resolution will continue to affect commodities markets this upcoming week. The fundamentals (from both the demand and supply sides) point out that oil market might continue to loosen up in the weeks to follow, so unless there will be a surprise (from the supply side such as Saudi Arabia lowering its production quota or demand side such as positive reports from the U.S) we may see oil prices resuming their downward trend during the week. If the major U.S reports won’t hit expectations then they could also adversely affect the oil rates.

Finally, if major exchange rates including EURO and Aussie dollar will appreciate against the U.S. dollar, then they may also pull up oil prices.