Crude oil prices bounced back during last week after they had tumbled down a week earlier. On Thursday Bernanke testified in the Senate; he voiced his concerns around the European debt crisis as it may affect the U.S economy but he say will there be another QE program in the near future. During the weekend it was announced Spain will ask from the EU a bailout of 100 billon euros for its banks.

The Brent premium over WTI remained in the $14-$16 range. During the upcoming week there are several publications and events that may affect oil rates including the U.S retail sales, China’s new loans, OPEC monthly report, IEA report and U.S jobless claims.

Here is an outlook and a weekly analysis on the crude oil market for June 11th to June 15th:

In the chart below are the shifts in WTI and Brent oil prices during June (prices are normalized to May 31st). It show how both oil prices have declined during most of the month (UTD). 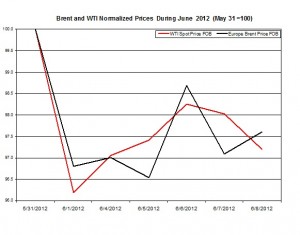 The difference between Brent oil and WTI spot oil remained in the $14-$16 per barrel range. During June the premium edged down by 0.06%. 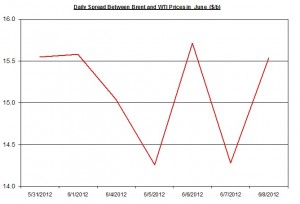 The standard deviations of both WTI and Brent oil prices plunged in June after they were very high during May compared to the previous months. This means the volatility of both energy prices has declined in June to their lowest level in 2012 (so far). 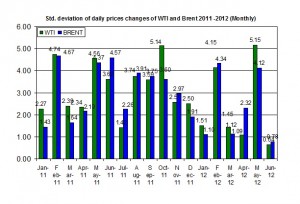 The upcoming report will be published on Wednesday, June 13th and will refer to the week ending on June 8th.

OPEC Monthly Report for May

This monthly update will refer to the main changes in crude oil and natural gas’s supply and demand worldwide; the report will also analyze the shifts in the production of OPEC countries during May 2012(See here a summary of the last  report);

The upcoming report will be published on Tuesday, May 12th and will refer to May 2012.

IEA Oil Report for May

This upcoming report will show an updated (outlook and analysis for the global crude oil market for 2012 and 2013 (See here a summary of the previous report);

The upcoming report will be published on Tuesday, May 12th.

These two reports will reflect the recent shifts in inventories, production in OPEC and non-OPEC countries and present update projections in the expected demand and supply for crude oil on a global level. These two reports could affect the oil market; if there will be a sharp shift in any of the abovementioned figures.

Monday– China New Loans: According to the previous report, the total loans declined; the recent rate cut of BOC might help rally the amount of loans taken in the months to follow;

Tuesday 19:00 –U.S. Federal Budget Balance: this report indicates the government debt growth and thus may affect the U.S dollar. In April the deficit shrunk by $59 billion to a deficit of $719 billion for the fiscal year of 2012;

Wednesday 13:30 –U.S. Retail Sales: in April, the retail sales edged up by 0.1% from the previous month; gasoline stations sales fell by 0.3% in April compared to March; this report could signal the development in U.S’s gasoline demand and thus may affect crude oil prices;

Wednesday 13:30 – U.S PPI: In the previous report regarding April this index for finished goods declined by 0.2% compared with March’s rate and rose by 1.9% in the past 12 months; this news might affect oil rates;

Thursday 13:30 –U.S Core CPI: According to the U.S Bureau of Labor statistics in April, the core CPI remained unchanged (M-o-M) and the index increased over the last 12 months by 2.3%; the core CPI rose last month by 0.2%;

Thursday 13:30 – U.S. Jobless Claims:  in the latest report the jobless claims declined by 12k to 377,000; this upcoming weekly report may affect commodities rates;

The EURO/USD exchange rate shifted gear and rose last week by 0.66%. Furthermore, the AUD/USD also increased by 2.24%. There are still positive correlations among these foreign exchange rates (EURO/USD, AUD/USD) and oil rate. If the U.S dollar will continue to depreciate against the EURO and Aussie dollar, it may further help rally oil prices.

The Brent premium over WTI oil remained in its range of $14-$16 in recent weeks. Despite expectations oil prices didn’t tumble down during last week and only slightly increased. The ongoing European debt crisis including the recent news about the Spanish bailout could also affect the forex and commodities markets. The fundamentals (from both the demand and supply sides) point out that oil market is still loosening up so unless there will be a surprise (e.g. escalation in the Iran/U.S relation), we might not see any sharp gains in the oil market anytime soon.

The upcoming IEA and OPEC reports could affect oil traders if these reports will show sharp shifts in their projections in current productions.

In the upcoming week the U.S reports including retail sales, Producer price index and consumer price index will presents the recent changes in U.S economy and may affect commodities rates; if these reports’ figures won’t meet expectations then they may adversely affect oil prices. If the U.S stock market will trade down this may also negatively affect oil prices. Finally, if major exchange rates including EURO and Aussie dollar will appreciate against the U.S. dollar, then they may pull up oil prices.