The prices of crude oil continued their upward trend during last week as both WTI and Brent rose by 0.3% and 1.2%, respectively.  The gap of Brent oil over WTI slightly widened again by the end of the week; the premium ranged between $6.32 and $8.63. Will oil prices continue to rally? This week, several reports and events may affect the oil market including U.S core durable goods, China’s manufacturing PMI, U.S GDP for Q1, and EIA oil weekly report.

Here is a weekly outlook for the oil market for June 23rd –27th:

In the chart below are the daily changes in WTI and Brent oil prices during the past several weeks (prices are normalized to April 30th, 2014). 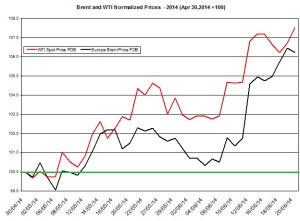 The difference between Brent and WTI oilwas in the range between $6.32 and $8.63 per barrel. During the week, the premium rose by $1.05 per barrel. 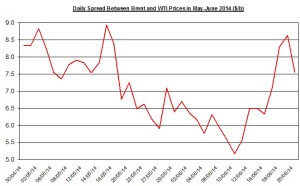 Supply: Oil imports rose by 2.7% during last week. Moreover, oil production edged up again by 0.1%; the total supply rose by 1.3%;

Demand: Refinery inputs slipped by 0.9% last week. In total, the demand was below the supply. This recent development may start to bring down oil prices as the U.S oil market loosened. After all, the linear correlation between the weekly price of oil lagged by on period and the shifts in the gap between supply and demand is mid-strong and negative at -0.248.

The chart below shows the developments in the difference between supply and demand and the price of oil. 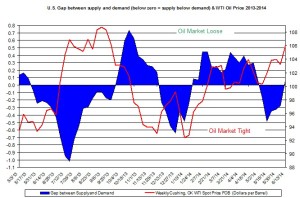 The next weekly report will be released on Wednesday, June 26th and will refer to the week ending on June 20th.

Here are several news items that could affect the direction of oil prices:

Wednesday – U.S Core Durable Goods: This monthly report regarding May will indicate the developments in U.S demand for commodities including oil and gas. As of April 2014, new orders of manufactured durable goods increased to $239.9 billion – a 0.6% rise compared to March; if this report shows additional growth in new orders, then it could rally not only the USD but also commodities;

Wednesday – Final U.S GDP 1Q 2014 Estimate: This will be the last estimate of U.S’s first quarter 2014 real GDP growth. In the last estimate the U.S GDP contacted by 1% in the first quarter (annual pace). If the growth rate were to be revised down again, this might adversely affect not only the US dollar but also commodities prices;

From the supply side, the sharp increase in imports and modest gain in production are likely to keep loosening up the oil market. Further, from the demand side, refinery inputs slipped again. In total, the demand was below the supply for the first time since early May. But the ongoing tensions in Iraq could keep oil prices elevated for the short term. The difference between Brent and WTI remained in range between $6 and $8 and is likely to slightly widen to the $7 and $9 range.

The bottom line, on a weekly scale, oil is likely to slowly increase, unless tensions in Iraq will subside.