Here is a weekly outlook for the oil market for March 10th to 14th:

In the chart below are the daily changes in WTI and Brent oil prices during the past several months (prices are normalized to December 31st, 2013). As you can see, Brent and WTI oil prices rally in the past couple of months. 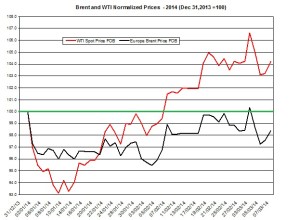 The gap between Brent and WTI oil slightly narrowed again last week as it ranged between $5.97 and $6.54 per barrel. During the week, the premium dropped by $0.06 per barrel. 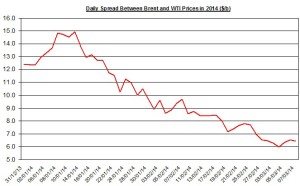 The oil stockpiles rose by 2.2 MB and reached 1,730.8 million barrels. The linear correlation between the shifts in stockpiles has remained stable at -0.191: this correlation suggests that oil price, assuming all things equal, may slightly fall next week. But in order to better analyze the fundamentals let’s review the changes in supply and demand:

Demand: Refinery inputs edged up by 0.3% last week. In total, the demand was still lower than the supply, and the difference between supply and demand widened. This current difference may drag down oil prices as the U.S oil market is moderately loosened last week.

The chart below presents the changes in the gap between supply and demand and the price of oil. 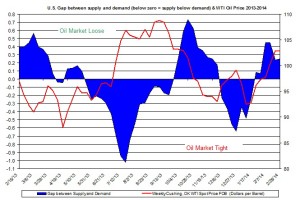 If U.S oil market loosens further, this could pull down oil price.

The next weekly report will be released on Wednesday, March 12th and will refer to the week ending on March 7th.

The OPEC report will show the main developments in crude oil and natural gas’s supply and demand worldwide; the report will also refer to the shifts in the production of OPEC countries during February 2014; this news may affect oil prices (See here a summary of the previous report).

The next report will be published on Wednesday, March 12th.

This upcoming monthly report will present an updated (for August) outlook and analysis for the global crude oil and natural gas market for 2012 and 2013.

The next report will be published on Friday, March 14th.

Thursday – China’s Industrial Production: Based on the recent monthly report, China industrial production slipped to an annual rate of 9.7%; if the growth rate falls again, it may suggest China’s economy is progressing slower;

Thursday –U.S. Retail Sales Report: This monthly update refers to February; in the last report regarding January, retail sales slightly fell by 0.4% (month-over-month); core retail remained unchanged; this report also shows the changes in U.S’s gasoline retail sales, which could provide some input regarding the developments in demand for gasoline;

From the supply side, the rise in imports and modest gain in production resulted in a moderate rise in the oil supply. From the demand side, refinery inputs slightly increased. Further, the storage slightly rose. In total, the supply was still higher than demand and the gap between the two widened. This could suggest the oil market has moderately loosened. Looking forward, the upcoming IEA and OPEC reports could provide some info regarding the progress of the supply and potential changes in demand on a global scale. Moreover, the upcoming reports regarding U.S and China could offer some input regarding the progress in the demand for oil. The gap between Brent and WTI ranged between $5 and $6. The looser oil market in the U.S may keep the gap between WTI and Brent oil at its current range. But if the US dollar continues to weaken against the Euro and Aussie dollar, this could pull up oil prices.

The bottom line, on a weekly scale, I remain neutral on oil; the gap between WTI and Brent may slightly decline.

← Gold and Silver Forecast for March 10-14
Will the Fed’s Policy cut Down the Price of Gold? →