Here is a weekly outlook for the oil market for March 3rd to 7th:

In the chart below are the daily shifts in WTI and Brent oil prices during the past several months (prices are normalized to December 31st, 2013). As you can see, Brent and WTI oil prices increased in recent weeks. 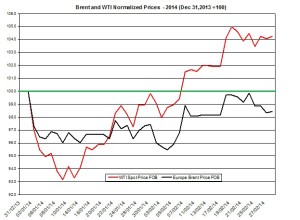 Premium of Brent over WTI – February

The difference between Brent and WTI oil narrowed again last week as it ranged between $6.48 and $7.82 per barrel. During the week, the premium dropped by $1.17 per barrel. 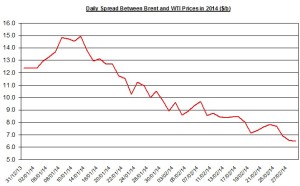 The oil stockpiles slipped by 0.5 MB and reached 1,728.6 million barrels. The linear correlation between the changes in stockpiles has remained stable at -0.197: this correlation implies that oil price, assuming all things equal, may slightly increase next week. But in order to better understand the fundamentals let’s examine the changes in supply and demand:

Demand: Refinery inputs edged down by 0.2% last week. In total, the demand was lower than the supply, and the gap between supply and demand narrowed. This current gap may pressure down oil prices as the U.S oil market is moderately tighter than it was last week.

The chart below shows the shifts in the gap between supply and demand and the price of oil. 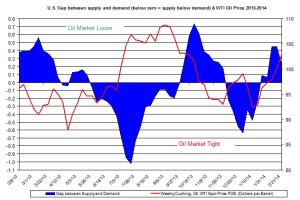 If U.S oil market loosens further, this could pull down oil price.

The next weekly report will be released on Wednesday, March 5th and will refer to the week ending on February 28th.

Monday – U.S Manufacturing PMI: This report will pertain to February 2014. In January, the index tumbled down to 51.3%; this means the manufacturing is growing at a much slower pace; this index may affect stock markets, USD, and crude oil and natural gas markets;

Tuesday – Australian GDP Fourth Quarter 2013: This quarterly report will refer to the Australia’s GDP growth rate for the fourth quarter of 2013. In the third quarter of 2013, the GDP grew by 0.6% (seasonally adjusted). Australia is among the leading countries in exporting commodities such as oil, LNG, and metal ores to big economies such as China and Japan;

Friday – U.S. Non-Farm Payroll Report: In the previous employment report regarding January  2014, the labor market modestly grew: The number of non-farm payroll employment increased by 113k – much lower than the number many had expected; the U.S unemployment rate inched down to 6.6%;

From the supply, the plunge in imports and stagnate production resulted in a drop in the oil supply. From the demand, refinery inputs slipped again. Further, the storage slightly fell. But in total, the supply was still higher than demand even though the gap between the two narrowed. This could suggest the oil market has moderately tighter. Looking forward, the upcoming reports regarding U.S and China could offer some additional information regarding the progress in the demand for oil. The gap between Brent and WTI ranged between $6 and $7. The tighter oil market in the U.S may further narrower the gap between WTI and Brent oil. Moreover, if the US dollar continues to weaken against the Euro, this could pull up oil prices.

The bottom line, on a weekly scale, I guess oil price may slightly rise; the gap between WTI and Brent may drop again.

← Gold and Silver Forecast for March
Will Silver Recover from its Recent Fall? →