Crude oil prices continued their descent and mostly declined during the month (so far). The reports from OPEC and IEA might suggest the oil market is loosening up.  The Brent premium over WTI slightly rose to $14 -$15 range. During the upcoming week there are several reports and events that may affect the oil market including the U.S CPI, Euro Area Industrial production, EU GDP for Q1 2012, .S Housing starts, and U.S jobless claims.

Here is an outlook and a weekly analysis on the crude oil market for May 14th to 18th:

In the chart below are the shifts in WTI and Brent oil prices during May (prices are normalized to April 30th). It shows how both oil prices have sharply declined during most of the month so far. 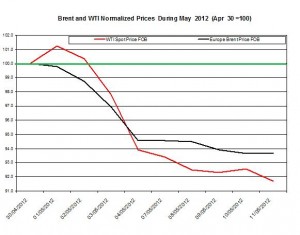 Premium of Brent over WTI –May

The difference between Brent oil and WTI spot oil slightly rose during last week, and was in the range of $14-$16 per barrel. During May the premium increased by 7.57%. 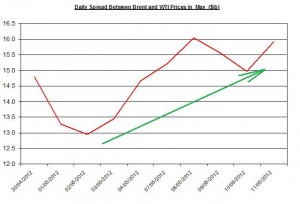 The upcoming report will be published on Wednesday, May 16th and will refer to the week ending on May 11th.

According to the latest report by the Organization of the Petroleum Exporting Countries regarding the recent developments in the oil market, the OPEC oil production slightly increased again during April compared with March’s oil production levels. This rise was mainly due to Saudi Arabia and Libya’s growth in oil production. Iran’s oil production fell by 3.1%.

This new may have also helped bring oil prices down a bit as the oil supplies are stable despite the tensions between Iran and the U.S.

According to the recent report by the IEA – International Energy Agency on the oil market for April 2012, the global Oil Supplies rose last month; the non-OPEC supply also increased. OPEC oil inventories expanded during March. On the other hand the global crude throughputs reached a season low of 73.4 million barrels per day during April.

This low figure coincided with the refinery maintenance. There are expectations that this crude runs will pick up during May.

If this will be the case then oil market might loosen up; thus it could also bring oil prices down.

Tuesday 10:00– Euro Area GDP 1Q2012 Report: According to the previous report, during the Q4 2011, the Euro Area GDP contracted by 0.3% (Q-o-Q). This news may affect the projections of the oil demand in Europe; the current expectations are of another a low growth rate or even another contraction for the first quarter; if there will be another contraction then technically it will mean Euro Area is in a recession;

Wednesday 13:30 – U.S. Housing Starts: the U.S Census Bureau will report on the U.S housing starts for April 2012; this report was historically correlated with gold price – as housing starts fell, gold prices tended to rise the following day (even when controlling to the U.S dollar effect); in the previous report, the adjusted annual rate reached 654,000 in March 2012, which was 5.8% below February’s rate of 694,000;

Thursday 13:30 – U.S. Jobless Claims:  in the previous report the jobless claims edged down to 367,000; this upcoming weekly update may affect the direction of commodities via the US dollar;

Thursday 15:00 – Philly Fed Manufacturing Index: In the previous survey, the growth rate moderately fell to +8.5 in April. If this trend will continue this index may adversely affect the U.S Dollar, American stock markets, oil prices (the recent Philly Fed review);

Friday 13:00 – Canada’s Core CPI: in the previous report the Canadian CPI rose by 1.9% during the past 12 month up. This report might affect the direction of Canadian dollar, which is also strongly linked with oil prices;

Forex and Crude Oil Prices –May

The EURO/USD currency continued its downward trend and fell last week by 1.27%. Furthermore, the AUD/USD also declined by 1.58%. There are still positive and strong linear correlations among these currencies pairs (EURO/USD, AUD/USD) and crude oil prices. If the U.S dollar will keep appreciating against the EURO and Aussie dollar in the days to follow, it may adversely affect crude oil prices.

The Brent premium over WTI oil slightly rose last week but is still much lower than it once was a few weeks back. If the EU economy will continue to show economic slowdown (GDP) this might adversely affect Brent oil price and further contract the Brent premium over WTI. The recent IEA report might suggest the oil market will further loosen up mainly in Europe; this could also be a factor to pull down oil prices.

In the upcoming week the U.S core CPI, Philly Fed and housing starts reports will be published. These reports will show the developments in U.S economy and may affect commodities prices; if these reports’ figures will meet the current expectations then they may positively affect oil prices. If the U.S stock market will continue to fall this may adversely affect crude oil prices. Finally, if major currencies including EURO and Aussie dollar will keep depreciating against the U.S. dollar, then they may also pull down crude oil prices.