During last week, crude oil changed direction and rose, which coincided with the modest depreciation of the USD against the Yen and Aussie dollar. The oil stockpiles rose by 0.7MB. During last week, WTI oil rose by 1.43%; Brent oil, by 3.52%. The gap between the Brent oil and WTI expanded: The difference between Brent and WTI ranged between $22 and $23. Will oil prices change direction and fall next week? During the upcoming week there are several reports and publications that could also affect the oil market. These news items include: U.S Retail sales, IEA monthly report, minutes of the FOMC, Philly Fed survey and EIA oil weekly report.

Here is a weekly outlook and analysis of the crude oil market for November 12th to 16th:

In the chart below are the developments in WTI and Brent oil prices during the month (prices are normalized to October 31st). As seen, the prices of oil shifted from gains to losses with an unclear trend during the month. 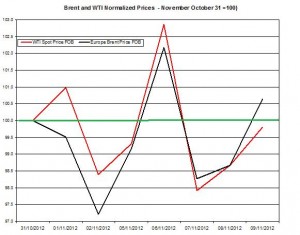 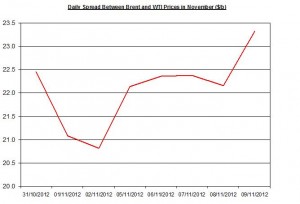 The oil stockpiles rose by 0.7MB and reached 1,793.9 million barrels. The linear correlation between the changes in stockpiles tends to be negative: this correlation suggests that oil price, assuming all things equal, will slightly decline next week. The upcoming report will be published on Wednesday, November 14th and will refer to the week ending on November 9th.

This upcoming monthly report will present an updated (for October) outlook and analysis for the global crude oil and natural gas market for 2012 and 2013.

The next report will be published on Wednesday, November 13th.

Wednesday – U.S. Producer Price Index: In the latest report regarding September this index for finished goods hiked again by 1.1% compared with August’s rate and by 2.1% in the last 12 months; this news might affect commodities;

Wednesday –U.S. Retail Sales Report: in the recent report regarding September, the retail sales rose by 1.1% from the previous month; gasoline stations sales increased by 2.5% in September; this report could signal the developments in U.S’s gasoline demand and thus may affect crude oil prices;

Thursday – Minutes of September’s FOMC Meeting: The minutes of the recent FOMC meeting might add some additional insight behind this non-decision and more important the potential future steps of the FOMC especially after the U.S Presidential elections, the upcoming decision to be made regarding the U.S fiscal cliff and the upcoming FOMC meeting at the middle of December;

Thursday – Philly Fed Manufacturing Index: In the recent October survey, the growth rate rose to +5.7 in October. If the index will continue to rise it may positively affect not only U.S Dollar but also commodities prices (the previous Philly Fed review);

The EURO/USD currency pair decreased again last week by 0.95%. Conversely, the AUD/USD rose by 0.49% last week. This rise may have moderately contributed to the rally of oil prices. Further, there are still positive correlation among these currencies pairs (AUD/USD) and oil prices. E.g. the linear correlation between the price of oil and AUD /USD was 0.51 during the month. If the U.S dollar will appreciate against the EURO and AUD, it may pull back oil prices.

Following the sharp rally in the prices of oil during last week, there might a correction to such a decline during this week. The gap between Brent and WTI oil expanded last week but might change direction and contract during next week. Oil stockpiles slightly rose last week, which could suggest that oil prices in the U.S will slightly decline next week. The recent storms in the U.S didn’t seem to affect the oil pipelines but did cause a shutdown of refineries in the Northeast.  This situation, however, isn’t likely to last long. The upcoming reports including U.S retail sales Philly Fed and U.S industrial production reports could affect the direction of oil from the projected demand side. If these reports will show some progress, they could raise the prices of oil. The upcoming IEA’s report could affect oil prices if the report will reveal a sizable change in oil production or projected demand. Finally, if major currencies including EURO and Aussie dollar will depreciate against the U.S. dollar, then they may also pull back oil prices. The bottom line, I guess the prices of oil will resume their downward trend on a weekly scale even thought they could shift from gains to losses throughout the week.