During last week, crude oil continued their downward trend, which coincided with the appreciation of the USD against the Euro and Canadian dollar. The oil stockpiles changed direction and rose during last week by 3.9 M bl. During the previous week, WTI oil declined by 4.2%; Brent oil, by 0.4%. The gap between the Brent oil and WTI expanded: The difference between Brent and WTI ranged between $21 and $24. Will oil prices further fall next week? The concerns over the potential adverse effect of Hurricane Sandy could affect oil prices. During the upcoming week there are several reports and events that may also affect the oil market. These reports include: U.S non-farm payroll report, China and U.S manufacturing PMI, and EIA oil weekly report.

Here is a weekly outlook and analysis of the crude oil market for October 29th to November 2nd:

In the chart below are the shifts in WTI and Brent oil prices during the month (prices are normalized to September 28th). As seen, the prices of oil have had a downward trend during recent weeks. 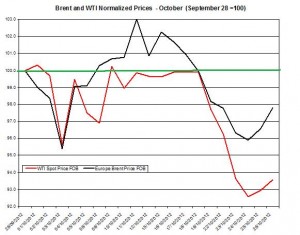 Premium of Brent over WTI – October/November

The difference between Brent oil and WTI spot oil rose during last week; it ranged during last week between $21 and $24 per barrel range. During the month the premium increased by 16.23%. 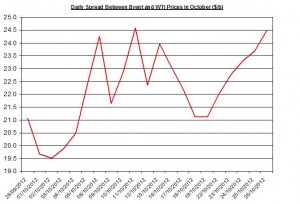 The oil stockpiles changed direction and rose during the previous week by 3.9 M bl to reach 1,793 million barrels. The linear correlation between the changes in stockpiles tends to be negative: the linear correlation between oil price and the lagged by one week oil stockpiles is -0.183, this relation suggests that the price of oil, assuming all things equal, will fall next week. The upcoming report will be published on Wednesday, November 1st and will refer to the week ending on October 26th.

Tuesday – U.S Consumer Confidence: according to the recent monthly report, the consumer confidence index rose in September (M-o-M). The current expectations are that the October index may fall; this report might affect commodities prices including oil;

Wednesday – Canada’s GDP by Industry: In the previous report regarding July 2012, the real gross domestic product edged up by 0.1%. This report may affect the strength of the Canadian dollar currency which is strongly linked with commodities;

Wednesday – China Manufacturing PMI: According the recent report the Manufacturing PMI rose to 49.8; this means China’s manufacturing sectors continues to contract but at a slower pace than in the previous month; if the index will rise again and even pass the 50 mark, this may positively affect oil;

Wednesday – U.S. Manufacturing PMI: During September 2012 the index rose to 51.5%, which means the manufacturing is growing; this index may affect forex, crude oil and natural gas markets;

Friday – U.S. Non-Farm Payroll Report: in the recent report the number of non-farm payroll employment rose by 114k; if the upcoming report will continue to show growth of above 110 thousand (in additional jobs), it could positively affect the prices of oil (see here my last review on the U.S employment report);

The EURO/USD currency pair fell last week by 0.65%. These changes may have contributed to the decline of oil prices. Further, there are still positive correlation among these currencies pairs (EURO/USD) and oil prices. E.g. the linear correlation between the price of oil and EURO/USD was 0.26 during October. If the U.S dollar will further appreciate against the EURO, it may pull down oil prices.

The difference between Brent and WTI oil slightly rose last week but may fall during next week. The recent news of Hurricane Sandy could pull up the prices of oil in the U.S especially if the Hurricane may damage pipelines. On the other hand, the demand and supply forces are likely to pull down the price of oil. Oil stockpiles rose last week, which could suggest that oil prices in the U.S will fall next week. The upcoming U.S reports including manufacturing PMI and non-farm payroll report could affect oil rates. If these reports will show some progress, they could pull up oil prices. If China’s manufacturing PMI won’t rise, it could adversely affect the price of oil. These events and reports could suggest that the volatility in the oil market could be high during the upcoming week. Finally, if major currencies including EURO and Aussie dollar will depreciate against the U.S. dollar, then they may also pull down oil prices. The bottom line, I guess the prices of oil will decline on a weekly scale even thought they could shift from gains to losses throughout the week.