The prices of oil (WTI and Brent) bounced back during last week: WTI rose by 1.48%; Brent oil, by 1.01%. As a result, the gap of Brent oil over WTI slightly contracted: The premium ranged between $5.09 and $6.04. According to the latest EIA weekly report, oil stockpiles increased again by 5.03Mb. In the U.S, imports and production rose last week. Refinery inputs declined. Will oil change direction and fall next week? This week, several reports may move the oil market. These items include: Minutes of the FOMC meeting, OPEC monthly report, IEA monthly update, and EIA oil weekly report.

Here is a weekly outlook and analysis for the oil market for October 7th to October 11th:

In the chart below are the daily shifts in WTI and Brent oil rates during the year (prices are normalized to January 31st). As seen below, oil prices have bounced back last week. 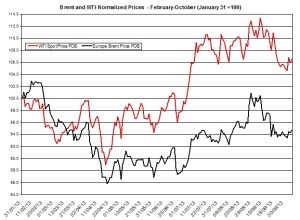 Premium of Brent over WTI – October

The gap between Brent and WTI oil slightly contracted last week as it ranged between $5.09 and $6.04 per barrel. Moreover, during the week, the premium slipped by $0.14 per barrel. 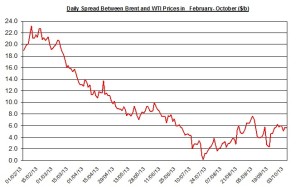 The oil stockpiles rose by 5.03 MB and reached 1,821.7 million barrels. The linear correlation between the changes in stockpiles has remained stable at -0.195: this correlation implies that oil price, assuming all things equal, may fall next week. But in order to better understand the developments in fundamentals let’s also look at the changes in supply and demand:

Demand: Refinery inputs declined by 0.8% last week. In total the demand remained higher than the supply; furthermore, the gap has contracted – this may pressure down oil prices as the oil market in the U.S will further loosen. 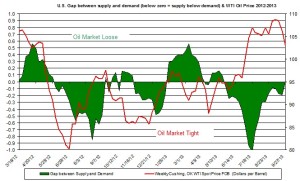 As seen above, the looser oil market in the U.S coincided with the decline of oil price in recent weeks.

The next weekly update will come out on Wednesday, October 9thand will refer to the week ending on October 4th.

The OPEC report will present the main changes in crude oil and natural gas’s supply and demand worldwide; the report will also refer to the shifts in the production of OPEC countries during September 2013; this news may affect oil prices. This report could also show any changes in Libya’s oil exports, which have substantially declined in recent months.

The next report will be published on Thursday, October 10th.

This upcoming monthly report will present an updated (for September) outlook and analysis for the global crude oil and natural gas market for 2013and 2014.

The next report will come out on Friday, October 11th.

Tuesday – German Factory Orders: The upcoming report will refer to September 2013. In the last update, the factory orders fell by 2.7% during August;

Wednesday – Minutes of the last FOMC Meeting: In the September FOMC meeting the Fed surprised the markets as it had decided to keep its monetary policy unchanged and not to taper its QE3 program. The no-tapering decision had short term effect on the prices of gold and silver but the in the bonds market long term treasuries rates fell down. Some suspect the decision was close and could have gone in the other direction (i.e. tapering QE3). The forthcoming minutes might offer some additional information behind the Fed’s recent decision and how close the decision was. This could also offer some perceptive behind the next two FOMC meetings. This report could affect commodities markets;

Friday – China’s Trade Balance: According to the latest monthly report, China’s trade balance rose to a $28.5 billion surplus; if the surplus further rises, it could indicate China’s economy is improving and thus may positively affect commodities;

From the supply side, the rise in oil imports and production led to expansion in supply.  From the demand side, refinery inputs decreased again. In total, the gap between supply and demand has contracted, which could suggest the oil market is loosening. Moreover, the gap is also very low compared to its state a few months back. Looking forward, the upcoming Europe, U.S and China’s reports could offer some additional insight regarding the potential developments in demand for oil. These reports include German factory orders, and China’s trade balance. If these reports exceed expectations, they may pull up oil prices. The minutes of the FOMC meeting could affect oil price via the potential changes in the USD.  The gap between Brent and WTI may remain around the $4-$6 until new developments in the Middle East or Libya will unfold. Finally, the fundamentals suggest oil prices should further fall in the mid-term as long as tensions in the Middle East are under control and the gap between supply and demand doesn’t rise.

The bottom line, on a weekly scale, I guess oil price will resume its downward trend.