Throughout last week, crude oil prices didn’t do much as both WTI and Brent oil slightly declined.  The difference between Brent and WTI also declined. In regards to the recent weather conditions, Hurricane Leslie was downgraded to a tropical storm and is expected to slip by Bermuda. This means that for now there aren’t any weather conditions that could adversely affect the oil market. During last week, WTI oil slipped by 0.05%; Brent oil, by 1.1%. The oil stockpiles fell during last week by 9.6 M bl.  This fall could have been, in part, due to the shutdown of oil refineries in the Gulf of Mexico due to Hurricane Isaac.

During the upcoming week there are several reports and events that may affect the oil market including: U.S retail sales, OPEC and IEA report, FOMC meeting, and U.S PPI.

Here is a weekly outlook and analysis of the crude oil market for September 10th to 14th:

In the chart below are the shifts in WTI and Brent oil prices during the month (prices are normalized to July 31st). It presents that oil prices have increased during recent weeks. 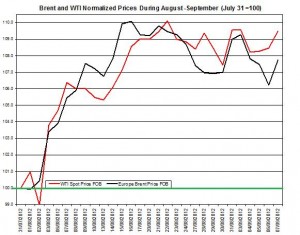 The difference between Brent oil and WTI spot oil declined a bit to the $17-$19 per barrel range. During the month the premium rose by 6.27%. 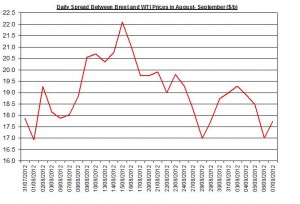 The oil stockpiles declined during the previous week by 9.6 M bl to reach 1,787.7 million barrels. The upcoming report will be published on Wednesday, September 13th and will refer to the week ending on September 7th.

The OPEC report will show the main changes in crude oil and natural gas’s supply and demand worldwide; the report will also pertain to the shifts in the production of OPEC countries during August 2012; this news may affect oil prices (See here a summary of the previous August report).

The next report will be published on Tuesday, September 11th.

This upcoming monthly report will present an updated (for August) outlook and analysis for the global crude oil and natural gas market for 2012 and 2013.

The next report will be published on Wednesday, September 12th.

Tuesday –American Trade Balance: according to the previous American trade balance report regarding June 2012 the goods and services deficit declined during the month to $42.9 billion;

Thursday – U.S. PPI: In the recent report regarding July this index for finished goods rose by 0.3% compared with June’s rate and increased by 0.5% in the last 12 months; this news might affect gold and silver prices;

Thursday – FOMC Meeting: Following the speech of Bernanke and the minutes of recent FOMC meeting, it seems that the market has already concluded that there will be another QE program in the near future. I speculate that even if the FOMC won’t announce of another QE program but will only allude to its intention to do so in the near future, this news is likely to further pull up commodities prices;

Friday –U.S. Retail Sales Report: in the recent report regarding July, the retail sales rose by 0.8% from the previous month; gasoline stations sales increased by 0.5% in July compared to June; this report could signal the changes in U.S’s gasoline demand and thus may affect oil prices;

The EURO/USD currency pair increased last week by 1.89%; further, the AUD/USD also rose by 0.61%. These rises, however didn’t help to pull up the prices of oil. Nonetheless, there are still positive correlation among these currencies pairs (EURO/USD, AUD/USD) and crude oil price. E.g. the linear correlation between the price of oil and Euro/USD was 0.51 during August- September. If the U.S dollar will continue to depreciate against the EURO and Aussie dollar, it may rally oil prices.

The difference between Brent and WTI oil shrunk again during last week and may continue to dwindle during the following week. Oil stockpiles fell last week plausibly due, in part, to the effect of Hurricane Isaac. This could also suggest oil prices will rise during the week. The upcoming U.S reports including retail sales and PPI could affect oil rates. Further, the upcoming FOMC meeting could pressure up crude oil prices if the FOMC will announce or even just hint of an upcoming QE program. Finally, if major currencies including EURO and Aussie dollar will further appreciate against the U.S. dollar, then they may pull up oil prices.