Crude oil prices had many twists and turns during 2011 but in the end, crude oil prices finished the year moderately above their initial price level from the beginning of the year: WTI oil price increased by 7.9% and Brent oil price rose by 12.27%. Let’s shortly examine the crude oil market in 2011 and try to provide and outlook for crude oil prices in 2012. 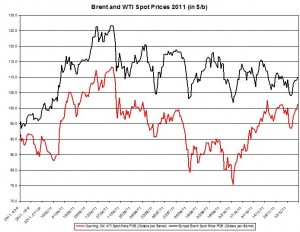 Some attribute this rise to the sudden uprise in the Middle East mainly in Libya – one of the leading OPEC crude oil producers in Africa with nearly 1.6 million barrels per day during 2010; the civil war in Libya caused a shut down of its production. During the next several months, crude oil prices shifted with rises and falls but had a downward trend, as WTI oil price reached a year low of $75.4 per barrel on October 4th. There are five suggested reasons for this decline:

In the last several months of 2011 crude oil prices rallied as the U.S. economy continued to show signs of recovery from the demand side, and the rising tensions in Iran may have helped push up crude oil prices from the supply side. 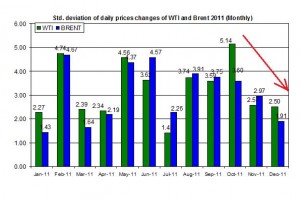 The Difference between the two commodities’ prices had a shift in its direction during 2011:  the premium started to rise during the first few months of the year, partly due to the high oil stockpiles in the U.S. and the tension in the Middle East that caused Brent oil to outperform WTI oil price. 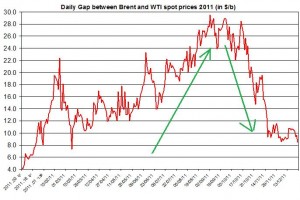 But as the U.S. stockpiles declined and the instability in the Middle East dissipated mainly in Libya, so did the Brent premium declined.

Let’s examine the relation of crude oil prices with other indexes:

The chart below shows the strong relation of crude oil prices and S&P500 index during 2011 (divided to months). 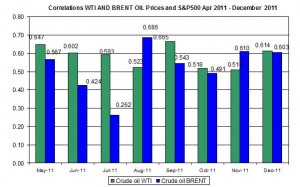 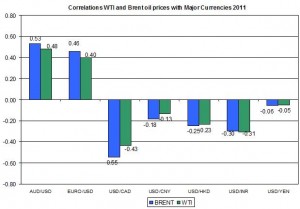 As seen in the chart above, the strong relation of crude oil prices was with the Australian dollar and Canadian dollar. If these currencies will depreciate against the US dollar in 2012 this may also affect crude oil to trade down.

Following the analysis of 2011, what does it mean we should expect from the crude oil market in 2012?

There are still concerns in regards to the recovery of Europe; the situation in U.S. isn’t clear but it is likely to present a steady growth; there are also concerns in regards to the growth of China’s economy. If China’s growth rate will slow down, this could adversely affect its crude oil demand and bring down oil price. Thus from the demand side, I speculate, at best, crude oil prices will not be dragged down. If however, any of these economies will pull into a slowdown, it could also pressure down crude oil prices.

There are growing concerns from Iran with the rising tension between it and the West. In the unlikely event of a sudden escalation in the relations between Iran and the West that will impede the supply of Iranian crude oil to the West, it may sharply bring up crude oil prices. But again this scenario has a small chance of occurring and if so, it probably won’t keep crude oil prices up for a long time. On the other hand, Libya will likely to continue raising its crude oil production and bringing its production to the 2010 levels.

The U.S. stock market didn’t do well in 2011, but if it will rally in 2012 it could help push up crude oil prices. On the other hand, if the major currencies such as Euro and Australian dollar will deprecate against the U.S. dollar it could also drag down crude oil prices.

In conclusion, I speculate, all things being equal, crude oil prices will moderately rise during 2012 by a similar rate to 2011. If the tension in the Middle East will erupt, it could pressure up crude oil prices for a short period . But if the growth of major economies, mainly U.S., EU and China will slowdown it could also moderately bring down crude oil prices.