Crude oil prices continue to zigzag on Friday as they did throughout October; currently the major energy commodities are traded up. The recent news from Canada and U.S. about the encouraging employment reports may contribute to the light optimism in the commodities market that may help crude oil prices to climb up. Today, the European industrial production report will be published, Australia’s business confidences survey and Japan’s current account. Here’s an outlook and analysis of the crude oil market for today, October 10th:

The chart below shows the prices development of WTI spot oil and Brent oil during October (prices are normalized to 100= 30 of September) . 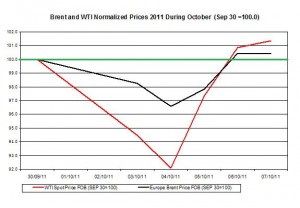 The premium of Brent oil over WTI spot oil slipped on Friday to $22.89.  During October there was a downward trend for this premium as it declined by 2.80%. 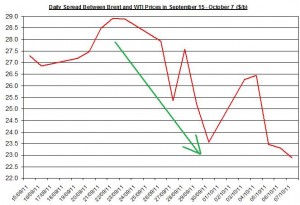 During the week of September 30th, natural gas storage, imports and consumption increased while natural gas production and prices slipped.

The U.S. employment inclined in September by 103,000 according to the last U.S. labor report, which was published on Friday, October 7th by the Bureau of Labor Statistics. The rate of unemployment remained unchanged at 9.1%.

This news may have added some light optimism in the financial markets even though the increase wasn’t more than the rate needed to keep the average natural growth in population.

The AUD to USD exchange rate slightly inclined on Friday by 0.23%. On the other hand, the USD appreciated against the EURO and CAD. The new of the employment situation in Canada and even more so in the U.S may have affected not only the forex markets, but also the major commodities prices. That being said, if the U.S dollar will depreciate against the above-mentioned currencies as it did during October, this shift may affect crude oil prices to incline.

The S&P500 index slipped on the last day of the week with a 0.82% drop on Friday to reach 1,155.46. In recent months there was a strong positive correlation between crude oil prices and S&P500 index (e.g. for WTI it was 0.665 and for Brent oil it was 0.543).  If the U.S stock markets will continue to rally as they did in recent days, they may further affect crude oil prices to recover as well from the sharp falls of September.

Major crude oil prices are currently traded slightly up in the European market:

Crude oil prices didn’t do much on Friday, but currently they start to pick up again.  The rally in the U.S. and European stock markets may have helped crude oil prices to incline in recent days. The news of the employment situation in the U.S. and the speculation around the progress in the U.S economy may continue to affect crude oil traders. Therefore, I speculate that WTI oil price will dwell around $83-$88 and Brent oil price around $102-$109 during the second week of October.