Crude oil prices shifted to red as they have declined yesterday along with the rest of the financial markets including the American and European stock markets. The lower than expected quarterly growth of the China’s GDP may have contributed to these falls along with the ongoing speculation regarding the Euro-Area debt crisis. Currently crude oil prices are traded down. Today, U.S. Producer Price Index will be published; the U.S. TIC Long Term Purchases report and the Chairman of the Fed will give a speech.

Here’s an outlook and analysis of the crude oil market for today, October 18th:

The chart below presents the prices development of WTI spot oil and Brent oil during October (normalized prices Sept 30=100). 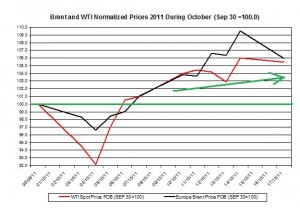 The premium of Brent oil over WTI spot oil sharply fell on Monday to $25.30. During October the premium sharply inclined by 7.43%. 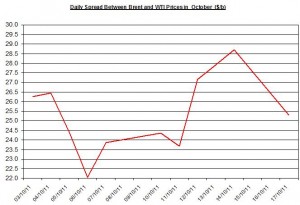 The GDP of China increased in the third quarter by 9.1% in annual terms. This is a decrease in the growth rate from the previous quarter as the GDP grew by 9.7% and 9.5% in the first and second quarters (in annul terms), respectively. This news may have been among the factors that contributed to yesterday’s falls in the commodities markets.

U.S. PPI: This report will show the progress in the PPI during September. In the previous report regarding August, this index for finished goods remained flat, after a rise in 0.2% in July;

U.S. TIC Long Term Purchases: The Treasury International Capital report will present the main changes in the purchases and sales of US long term treasuries in August (see here my last review of July 2011);

Bernanke Speaks: following the announcement of FOMC plan to purchase LT securities and to sell ST securities, the Chairman of the Fed is likely to address the economic outlook of the FOMC and his speech may affect commodities traders;

The Euro/USD exchange rate declined on Monday by 1.04%. Furthermore, the USD also appreciated against the AUD, CAD and GBP. The speculation around the European crisis continues to affect the forex and commodities markets. If the U.S dollar will appreciate against the risk currencies (AUD, CAD) as it did yesterday, this may also affect crude oil prices to decrease. 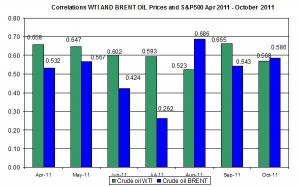 The rally of the US stock markets in recent weeks seems to have contributed to the rally of crude oil prices as seen in the graph below. 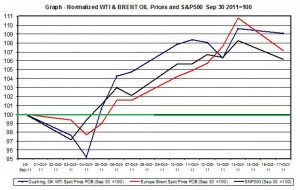 If the U.S stock market will continue to rise, it may further affect crude oil prices to incline as well.

The recent news from China may have pushed crude oil prices down yesterday. The speculation revolving the next step of the Euro leaders in resolving the debt crisis will continue to influence the financial markets including crude oil market.  I still speculate that during the week WTI oil price will settle around $85-$92 mark and Brent oil price around $108-$115.