Here’s a short analysis of the crude oil market for today, October 3rd:

The chart below shows the prices development of WTI spot oil and Brent oil in the past three months – July up to September. 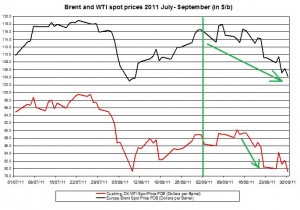 The premium of Brent oil over WTI spot oil slightly inclined on Friday to $25.06.  During September, this premium declined by 9.43%. 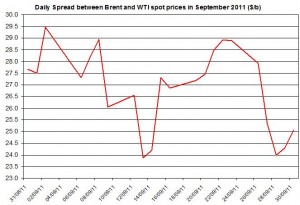 U.S. ISM Manufacturing PMI: This report will show the monthly change in manufacturing sector on a national level during September 2011. In August the index slightly declined to 50.6%; this index might affect traders of crude oil and natural gas (see here my review of last report);

Australian Trade Balance: The upcoming report will refer to August 2011. In the July 2011 report, there was a rise in export of non-monetary gold by $596 million (82%); if the gold exports will show an increase in August, it might suggest an increase in demand for non-monetary gold that could explain the changes in gold prices (see here last report);

The Euro to US dollar exchange rate sharply declined on Friday by 1.54%; many consider the increase in the Euro Area annual inflation in September to be among the factors that contributed to this sharp fall in EURO/USD. During September the Euro/USD completed a 6.83% decrease. The USD also appreciated on the last day of September against the AUD, and CAD which are historically strongly related to daily percent changes in crude oil prices.  If US dollar will continue to appreciate against the Euro, CAD and AUD, they may affect crude oil prices to decrease.

Crude oil prices closed the month with sharp falls and currently they continue their downward trend and keep on falling. The sharp fall in the US stock markets in Friday and the depreciation of the Euro, CAD and AUD against the USD are probably among the factors that contributed to the decline of crude oil prices on Friday. If this trend will continue, in which major currencies will devalue against the USD and the stock markets will decline, it could also contribute to the decline in crude oil prices throughout the day. I speculate that WTI oil price will remain around $75-$82 and Brent oil price around $102-$108 during the first week of October.