As part of my series reviewing energy commodities in 2010, I present here the main changes that occur to crude oil price (WTI spot price) during 2010, and show what could affect crude oil price in 2011.

Crude oil price rose by nearly 13.8% from January to December of 2010;  despite it’s not as near as the yearly price hike in 2009 of over 78%, 2010 still showed strength and outperformed natural gas prices (Henry Hub).

In the following crude oil charts for 2010 are the average monthly prices showing the upward trend mainly in the last few months of the year. 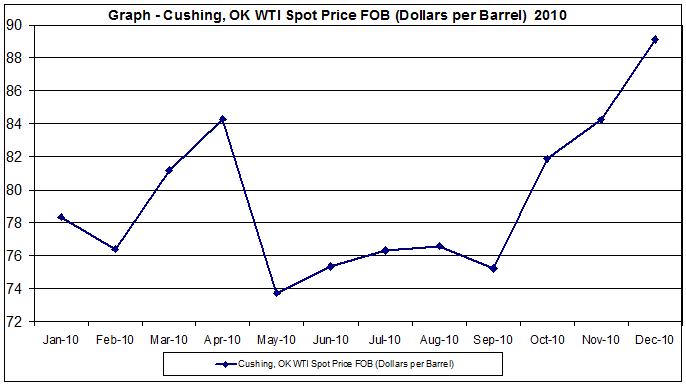 Does this rise could be related to the increase demand in the U.S. for crude oil or the lack of supply?

It could be, but I think this isn’t the real story. 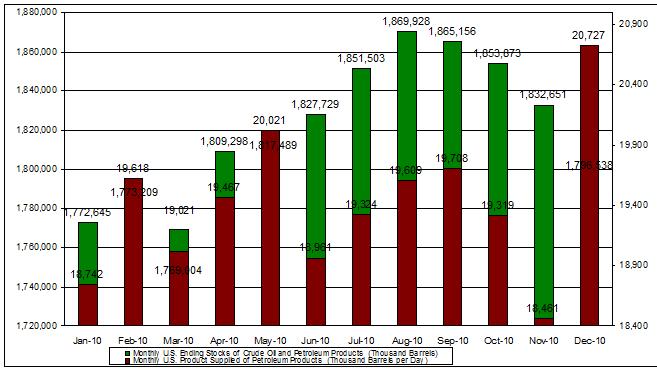 The table shows no apparent trend for either series during 2010, nor is there any strong correlation between the two.

It does show, however, that the decline in supply in the last several months of the year happen as crude oil price increased.

The reason for this decline in stock on the one hand and rise in crude oil price on the other, could be partly explained that during September- October major refineries in the US and Canada undergone maintenance repairs, while in France there was a workers strike that also slowed down the work its main refineries. As a result, there was a decrease in supply of gasoline, which drove crude oil price up.

When looking, however, on the U.S. Ending Stocks of Crude Oil and Petroleum Products (Thousand Barrels) on a yearly scale it seems that currently there is a high level of crude oil stocks and despite the decrease in stock during the year, it’s still a high level in an historic perspective. 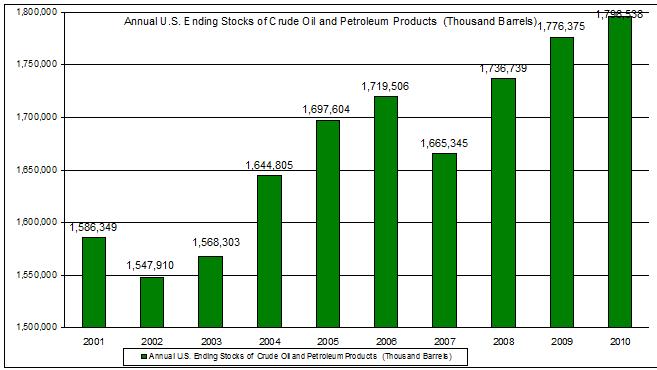 Therefore, it could mean that other counties such as China, the second largest consumer of crude oil, and one of the biggest importer of crude oil, is responsible for the crude oil price rise during 2010.

When analyzing the prospects of crude oil price in 2011, there are several aspects worth considering:

All in all, although the demand for crude oil in the U.S. doesn’t seem to  drive crude oil price up, there are plenty of other reasons why we should expect crude oil price to continue rising  in 2011.