According to the recent crude oil weekly update of the Energy Information Administration petroleum, crude oil stockpiles changed direction and rose by 1.5 million barrels. Propane stockpiles also rose for the first time in nineteen weeks. Could it be that the U.S has passed its winter time and the demand for heating oil will further drop in the weeks to come? In such a case oil prices in the U.S may start to come down until the driving season. Crude oil prices also didn’t move much last week and only edged down. In this week’s EIA update there is an analysis on the high gasoline exports of the U.S that didn’t seem to drive gasoline prices higher.

Here is a weekly summary for the week ending on March 16th 2012 of the U.S. oil and petroleum market:

The chart below presents the developments in petroleum and oil stockpiles and WTI crude oil price between 2010 and 2012. During said years the lagged linear correlation between WTI oil price and current oil stockpiles was -0.133. 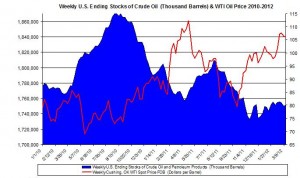 Petroleum production and imports (for the week of March 16th)

Below is a detailed recap of the information listed above (for the week of March 16th):

Propane stocks rose by 543 thousand barrels and reached 42,730 thousand barrels. The average residential propane price slightly increased by less than a penny but remained at $2.87 per gallon; the current price is only 1 cent higher than the rate during the same week in 2011.

Crude Oil, Gasoline and Diesel Prices for the Week Ending on March 16th

A detailed analysis of crude oil prices for the week ending on March 16th is herein.