In the recent petroleum and crude oil weekly update of the Energy Information Administration petroleum, crude oil stockpiles changed direction and declined for the first time in four weeks, last week by 3.9 million barrels. Crude oil prices slipped also during last week and they continue their recent downward trend in recent days. The increase in stockpiles may signal a decline in demand for oil and the ongoing tumble of natural gas prices doesn’t seem to help oil prices to remain high.

Here is a weekly summary for the week ending on April 6th 2012 of the U.S. oil and petroleum market:

The chart below shows the developments in petroleum and oil stockpiles and WTI crude oil price between 2010 and 2012. During said years the lagged linear correlation between WTI oil price and current oil stockpiles was -0.15. 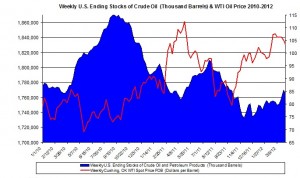 Petroleum production and imports (for the week of April 6th)

The four week average of U.S. production (million of barrels a day) for the week of April 6th reached at 5.934; it is 5.9% above the average production at the same week in 2011;

Below is a detailed recap of the information listed above (for the week of April 6th): 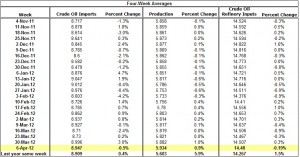 Crude Oil, Gasoline and Diesel Prices for the Week Ending on April 6th

The national average Diesel price on the other hand increased by 0.6 cent to $4.15/g, which is $0.07/g higher than last year’s average price at same time.