Oil price (WTI and Brent) slipped last week: WTI declined by 2.24%; Brent oil, by 1.22%. As a result, the gap of Brent oil over WTI widened again: The premium ranged between $19.01 and $16.91 – the highest range in months. Last week, the EIA’s weekly report presented a moderate decline in oil’s stockpiles by 1.6 million barrels. The agreement between Iran and leading nations may have cooled down the region and thus pressured down crude oil prices. Will oil continue to fall next week? This week, several reports and meetings may affect oil prices. These items include: U.S NF payroll report, U.S manufacturing PMI, OPEC summit, and EIA oil weekly update.

Here is a weekly outlook and analysis for the oil market for December 2nd to December 6th:

In the chart below are the daily developments in WTI and Brent oil prices during the past several months (prices are normalized to January 31st). As seen below, Brent and WTI oil prices slipped last week. 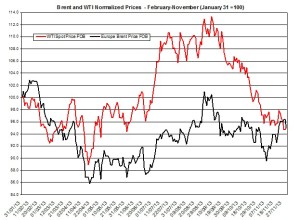 Premium of Brent over WTI – November

The gap between Brent and WTI oil grew again last week as it ranged between $19.01 and $16.91 per barrel. During the week, the premium increased by $0.76 per barrel. 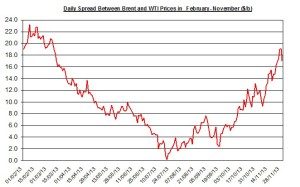 The oil stockpiles slightly fell by 1.6 MB and reached 1,793.5 million barrels. The linear correlation between the changes in stockpiles has remained stable at -0.208: this correlation implies that oil price, assuming all things equal, may slightly rise next week. But in order to better understand the fundamentals let’s analyze the developments in supply and demand:

Demand: Refinery inputs increased again by 0.8% last week. In total, the demand remained lower than the supply; the gap between supply and demand is still positive but the difference has slightly contracted – this may eventually pressure up oil prices as the U.S oil market continues to tighten. 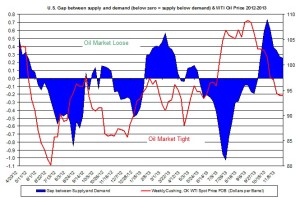 As seen above, the currently loose oil market in the U.S coincides with the downward trend of oil price in recent weeks. But if U.S oil market continues to tighten, as it did in recent weeks, this could eventually lead to an increase in oil price.

The next weekly report will come out on Wednesday, December 4th and will refer to the week ending on November 29th.

Monday – U.S. Manufacturing PMI: This report will pertain to November 2013. In October, the index inched up again to 56.4% – the highest level in the past couple of years; this means the manufacturing is growing at a faster pace; this index may affect stock markets, USD, and crude oil and natural gas markets;

Wednesday –OPEC Summit: This will be the second and last summit of the leaders of OPEC countries. In this summit, the leaders of OPEC will review the recent developments in the oil market, the current projections on supply and demand for 2014 and will decide on OPEC’s oil quota. The latest developments in Libya and Iran’s fractions with the West could affect the decision on OPEC’s oil quota;

Friday – U.S. Non-Farm Payroll Report: In the previous employment report regarding October, the labor market improved: The number of non-farm payroll employment rose by 204k – higher than the number many had expected; the U.S unemployment rate edged up to 7.3%; the forthcoming employment report could show additional rise in jobs. If the employment exceed 150 thousand (in additional jobs), this may pressure up oil prices;

From the supply side, the ongoing rise in imports and oil production is likely to pull down oil prices. OPEC’s meeting could stir up the markets if OPEC members decide to cut down OPEC’s oil quota.  From the demand side, refinery inputs increased by a higher rate than the supply did. Nonetheless, the storage remained nearly unchanged. Moreover, the difference between supply and demand has contracted due to slower growth rate in supply compared to demand; this could imply the oil market has tightened again. But as long as the gap remains high – demand is lower than the supply – oil prices are likely to further fall. Looking forward, the upcoming American reports could offer some additional insight regarding the progress of its economy. The gap between Brent and WTI picked up to the $14-$19 range. The potential agreement, which could ease the tension between the West and Iran, may cut down the gap between Brent and WTI. Nonetheless, the loose oil market in the U.S is likely to keep the WTI much lower than Brent oil. Moreover, if the USD continues to appreciate, this could reduce the price of oil.

The bottom line, on a weekly scale, I guess oil price may bounce back and rise