During last week, crude oil prices moved with an unclear trend. According to the recent EIA report, the oil stockpiles fell again by 1.4MB. During last week, WTI oil rose by 0.71%; Brent oil slipped by 0.13%. As a result, the gap between the Brent oil and WTI slightly narrowed; in any case, the difference between Brent and WTI remained in the range between $22 and $23. Will oil resume its downward trend next week? During the forthcoming week there are several publications and events that may affect the oil market. These items include: U.S non-farm payroll report, ECB rate decision, U.S manufacturing PMI, Australia’s GDP for Q3 and EIA oil weekly report.

Here is a weekly projection and analysis for the crude oil market for December 3rd to 7th:

In the chart below are the developments in WTI and Brent oil prices during last month (rates are normalized to October 31st). As seen, the prices of oil had a very sight upward trend during last month. 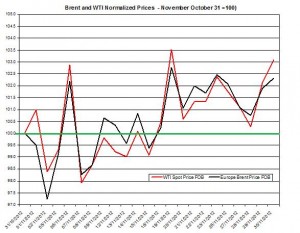 The difference between Brent oil and WTI spot oil declined during the week but remained in the range between $22 and $23 per barrel. During the month the premium slipped by 0.62%. 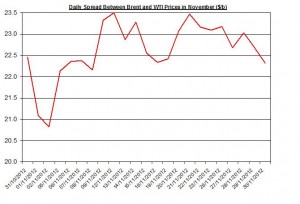 The oil stockpiles declined again by 1.4 MB and reached 1,781.5 million barrels. The linear correlation between the changes in stockpiles tends to be negative: this correlation implies that the price of oil, assuming all things equal, will slightly increase next week. The upcoming report will come out on Wednesday, December 5th and will refer to the week ending on November 30th.

Monday – U.S. Manufacturing PMI: During October the index reached 51.7%; if the index will further rise it could also positively affect crude oil prices;

Tuesday – Australian GDP Third Quarter 2012: In the second quarter, the GDP grew by 0.6% (seasonally adjusted). The slowdown in China’s economy might also adversely affect the growth of Australia’s GDP. Australia is among the leading countries in exporting commodities including oil; if the GDP growth rate will dwindle again it could affect the strength of Australia dollar (see here last report);

Thursday – ECB Rate Decision: Back in July the ECB decided to reduce its cash rate was back in July by 0.25p to 0.75%. ECB might decide to cut the rate by another 0.25pp. If ECB will cut the rate again, it may adversely affect the Euro;

Friday – U.S. Non-Farm Payroll Report: in the previous report, the number of non-farm payroll employment increased by 171k; the U.S unemployment rate edged up to 7.9%; if the upcoming report will continue to show growth of above 120 thousand (in additional jobs), this may affect commodities prices;

The EURO/USD edged up last week by 0.11%. Conversely, the AUD/USD declined by 0.31% during last week. This mixed trend may have contributed to the unclear trend in oil prices. Nonetheless, there are still positive correlation among these currencies pairs (Euro/USD) and oil prices, even though the relation has strengthened during the month. E.g. the linear correlation between the price of oil and EURO /USD was 0.45 during November. If the U.S dollar will appreciate against the EURO and AUD, it may pull down oil prices.

Following the unclear trend in the direction of prices of oil during last week, there might a rise in the volatility during this week on account of the many news items on this week’s agenda. The difference between Brent and WTI oil remained in its range last week and might continue to be in this range of $22-$24 during this week. Oil stockpiles declined last week, which could suggest oil prices in the U.S will increase this week. The upcoming reports on manufacturing PMI and jobless claims could affect the path of oil from the projected demand side; therefore if these reports will show some growth, they could pull up the prices of oil. On the other hand, the non-farm payroll, might affect differently oil prices and if the report will show high growth in employment, this could lower the chances of the Fed intervening again the financial markets and thus pulling down oil prices. Finally, if major currencies including EURO and Aussie dollar will depreciate against the U.S. dollar, they may also adversely affect oil prices. The bottom line, I guess the prices of oil will decline on a weekly scale even thought they could start the week with a correction to last week’s rise.