During the previous week, crude oil price rose again: WTI oil inched up by 0.33%; Brent oil rose by 2.41%. As a result, the gap between the Brent oil and WTI expanded; the difference between Brent and WTI ranged between $16 and $17. According to the recent EIA report, oil stockpiles declined by 2.6 MB. Will oil further rally next week? During the upcoming week, several publications may affect the oil market. These items include: U.S GDP for Q4, China’s manufacturing PMI, U.S’s manufacturing PMI and EIA oil weekly update.

Here is a weekly projection and analysis for the crude oil market for January 28th to February 1st:

In the chart below are the developments in WTI and Brent oil prices during the month (rates are normalized to December 30th). As seen below, the prices of oil (WTI) have risen in recent weeks. 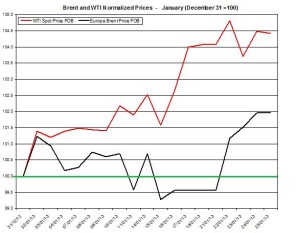 The difference between Brent oil and WTI spot oil slightly widen during last week as it ranged between $16 and $17 per barrel. During the month the premium declined by 9.8%. 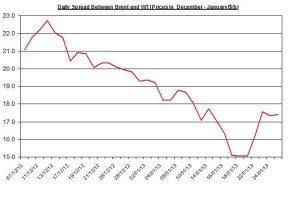 The oil stockpiles changed direction and declined by 2.6 MB and reached 1,796.5 million barrels. The linear correlation between the changes in stockpiles remains negative: this correlation implies that the price of oil, assuming all things equal, will slightly rise next week. The upcoming report will be published on Wednesday, January 30th and will refer to the week ending on January 25th.

Wednesday – First U.S GDP 4Q 2012 Estimate: This will be the first estimate of U.S’s fourth quarter 2012 real GDP growth. In the latest estimate the U.S GDP during the third quarter expanded by 2.7%; in the 2Q2012 the GDP growth rate reached 1.7% (annual rate). This shows a rise in the growth rate for the US’s GDP. If there will be a sharp change in the growth rate from Q2 to Q3 this could affect not only the US dollar but also commodities prices.

Thursday – China Manufacturing PMI: According the latest report regarding December 2012 the Manufacturing PMI remained at 50.6; this means that China’s manufacturing sectors is slowly expanding; last week’s flash manufacturing PMI rose again. If this upcoming report will also present growth, it could signal an improvement in China’s economy.  If the index will rise again, this may also pull up commodities rates;

Friday – U.S. Non-Farm Payroll Report: in the December report, the number of non-farm payroll employment increased by 155k; if in the upcoming report the employment will rise again by well above 120 thousand (in additional jobs), this may pull up commodities prices.

Friday – U.S. Manufacturing PMI: During December 2012 the index rose to 50.7%, which means the manufacturing is expanding.

The EURO/USD edged down last week by 0.16%. Further, the AUD/USD also slipped by 0.24% during last week. This downward trend may have curbed the rally of oil prices during the week. The correlations among these currencies pairs (Euro/USD) and oil prices are still positive and robust. E.g. the linear correlation between the price of oil and EURO /USD was 0.38 during December and January. If the U.S dollar will change direction and depreciate against the “risk currencies”, it may pull up oil prices.

Following the rise in the price of oil during the previous week, oil prices might further rise during the forthcoming week. The positive reports regarding the growth in China and U.S economies may have also helped pull up oil prices. The rise in the stock market and the cold weather in the U.S are additional factors that suggest the demand for oil will further rise in the weeks to follow. On the other hand, the difference between Brent and WTI oil may resume its decline and narrow to the range of $14-$16 in the coming days. Oil stockpiles declined last week, which could pressure up oil prices in the U.S this week. The upcoming reports on U.S and China’s manufacturing PMI, U.S GDP and non-farm payroll report could affect the path of oil from the projected demand side; therefore if such reports will show a rise in economic activities in these countries, they could positively affect oil prices. Finally, if major currencies including EURO will depreciate against the U.S. dollar, this may pull down oil prices. The bottom line, I guess the prices of oil will continue to pick up on a weekly scale.