Oil price (WTI and Brent) changed course and tumbled down last week: WTI decreased by 6.34%; Brent oil, by 4.72%. As a result, the gap of Brent oil over WTI slightly widened: The premium ranged between $11.92 and $12.93. The low trade volume in the commodities markets during last week due to the holiday season may have contributed to the sharp movement of oil prices. Some speculate, the recent drop was due to a potential rise in global oil supply in the near future especially from Libya. Moreover, the rally of the US dollar against the Euro could have also dragged down commodities prices.  Last week, the EIA’s weekly report showed another drop in oil’s stockpiles of 6.6 million barrels. Will oil change direction and bounce back? This week, several reports may affect oil prices. These items include: U.S non-farm payroll report, U.S and China’s trace balance updates, ECB rate decision, U.S  factory orders, and EIA oil weekly update.

Here is a weekly outlook and analysis for the oil market for January 6th to 10th:

In the chart below are the daily shifts in WTI and Brent oil prices during the past several months (prices are normalized to January 31st). As seen below, Brent and WTI oil prices rallied in recent weeks. 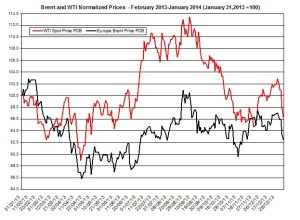 The difference between Brent and WTI oil slightly rose last week as it ranged between $11.92 and $12.93 per barrel. During the week, the premium declined by $0.59 per barrel. 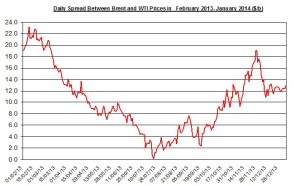 The oil stockpiles deceased again by 6.6 MB and reached 1,749.8 million barrels. The linear correlation between the shifts in stockpiles has remained stable at -0.206: this correlation suggests that oil price, assuming all things equal, may pull up next week. But in order to better understand the fundamentals let’s analyze the changes in supply and demand:

Demand: Refinery inputs rose again by 0.2% last week. In total, the demand was much higher than the supply. Therefore, due to the rise in demand and the drop in supply, the gap between supply and demand further widened. This difference may pressure back up oil prices as the U.S oil market continues to tighten.

The chart below presents the developments in the difference between supply and demand and the price of oil. 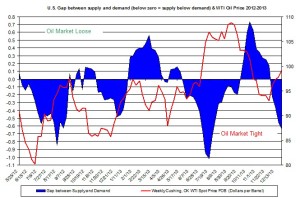 If U.S oil market further tightens, this could pull back up oil price.

The next weekly update will be released on Wednesday, January 8thand will pertain to the week ending on January 3rd.

Tuesday –American Trade Balance: This monthly update for November will present the changes in imports and exports of goods and services to and from the U.S, such as commodities such as oil and gas; based on the last American trade balance update regarding October the goods and services deficit narrowed to $40.6 billion;

Thursday – China’s Trade Balance: Based on the recent monthly update, China’s trade balance rose to a $33.8 billion surplus; if the surplus further increases, it could indicate China’s economy is improving and thus could positively affect oil prices;

Friday – U.S. Non-Farm Payroll Report: In the last employment report regarding November 2013, the labor market improved: The number of non-farm payroll employment increased by 203k – close to the number many had expected; the U.S unemployment rate fell to 7%; the upcoming employment report could show additional rise in jobs. If the employment exceed 150 thousand (in additional jobs), this may rally oil prices;

From the supply side, the sharp fall in imports is likely to further pull up oil prices. On the other hand, the steady rise in production could offset some of the positive effect the decline in oil imports have on prices. In total, the supply slightly contracted again last week. From the demand side, refinery inputs continue to rise. As a result, the storage declined again but a slower pace than previous weeks. Further, the gap between supply and demand has widened so that the demand remains elevated over the supply; this could suggest the oil market has tightened again. The recent low volume of trade in the past week on account of the holiday season may have contributed to the sharp movement of oil prices. Looking forward, the upcoming reports regarding U.S and China could offer some additional insight regarding the developments in oil demand in these countries. The difference between Brent and WTI ranged between $11 and $12. The tight oil market in the U.S is likely to get the WTI closer to the Brent oil. Conversely, if the US dollar continues to strengthen, this could pull down oil prices.

The bottom line, on a weekly scale, I guess oil price may bounce back and the gap between WTI and Brent remain at its current range.