Crude oil prices shifted with an unclear trend during the first couple of days of the week but soon enough they declined mainly on the last day of the week after the U.S labor report came out and showed that only 80 thousand jobs were added. The ECB rate reduction pulled down the Euro and in the process may have also slightly adversely affected oil rates.  During the week, WTI oil slightly fell by 0.6%. Brent oil, unlike WTI, finished the month rising by 1.24%.

During the upcoming week there are several reports that may affect oil rates including the U.S trade balance report, minutes of the FOMC meeting, China’s GDP, OPEC monthly report and IEA update.

Here is a weekly outlook and analysis of the crude oil market for July 9th to July 13th: 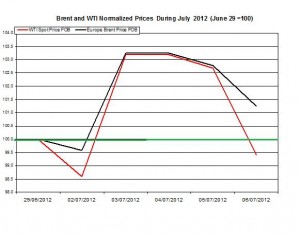 Premium of Brent over WTI – July 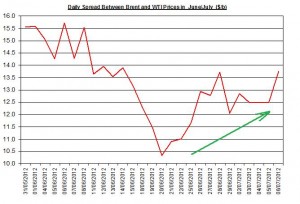 This report will also analyze the shifts in the production of OPEC countries during June 2012 (See here a summary of the last  report);

The upcoming report will be published on Wednesday, July 11th and will refer to June.

This upcoming report will show an updated outlook and analysis for the global crude oil market for 2012 and 2013 (See here a summary of the previous report);

The upcoming report will be published on Thursday, July 12th.

These two reports will reflect the recent changes in inventories, production in OPEC and non-OPEC countries and present update estimates of the expected demand and supply for crude oil on a global level. These two reports might affect the oil rates.

The upcoming report will be published on Wednesday, July 11th and will refer to the week ending on July 6th.

Tuesday –China’s Trade Balance: according to the recent report, China’s trade balance declined to a $18.7 billion surplus; if the surplus will remain high, it could indicate that China’s economic growth is progressing and thus may positively affect prices of commodities;

Wednesday –American Trade Balance: This monthly report for May 2012 will present the changes in imports and exports of goods and services to and from the U.S; according to the recent American trade balance report regarding April the goods and services deficit decreased during the month to $50.1 billion.

Wednesday – Minutes of FOMC Meeting: Following the recent FOMC meeting, in which it was decided to extend operation twist throughout the rest of 2012, the market reacted to this news as oil prices tumbled down. The minutes of the FOMC meeting might offer some insight behind this decision regarding the future steps of the FOMC especially in anticipation of the upcoming FOMC meeting at the end of the month;

Thursday –China Second Quarter GDP 2012: during the first quarter of 2012, China grew by only 8.1% in annual terms; the current expectations are that the Q2 2012 grew in annul terms by only 7.5%; if the growth rate will be lower than in the previous quarter it might adversely affect commodities;

Friday – U.S. Producer Price Index: In the recent report regarding May this index for finished goods fell by 1% compared with April’s rate and rose by 0.7% in the last 12 months;

The EURO/USD exchange rate fell last week by 2.97%. Furthermore, the AUD/USD slightly decreased by 0.26%. There are still positive correlations among these foreign exchange rates (EURO/USD, AUD/USD) and crude oil rate. E.g. the linear correlation between the oil price and Euro/USD is 0.768 during June and July. If the U.S dollar will continue to appreciate against the EURO and Aussie dollar, it may further pull down oil prices.

The Brent premium over WTI oil slightly rose again during last week and may continue to rise especially if the EU economy won’t show signs of progress. The ECB rate cut and the U.S labor report may have contributed to the weak Euro and also adversely affected oil rates during last week. If the upcoming U.S reports (trade balance, PPI) will continue to show weakens it could further drag down oil prices. If the Chinese reports mainly GDP for Q2 will not meet expectations and will show a slowdown in China’s economy it could also pull down oil. The fundamentals (at least from the demand side) point out that oil market might continue to loosen up in the weeks to follow. The upcoming EIA and OPEC reports will shed some light on the projected demand and the changes in supply and OECD inventories. If the reports won’t show a decline in production and a rise in inventories then this news could also lower the chances of oil prices rising during the upcoming week.

Finally, if major exchange rates including EURO and Aussie dollar will depreciate against the U.S. dollar, then they may also pull down oil prices.