Oil price (WTI) slightly recovered last week as it rose by 0.6%. On the other hand, Brent oil dropped by 1.5%. As a result, the gap of Brent oil over WTI narrowed: The premium ranged between $5.48 and $10.46. Last week, the EIA’s weekly update showed a modest drop in oil’s stockpiles of 0.5 million barrels. Will oil change direction? This week, several reports may affect oil prices. These items include: U.S core durable goods, China’s manufacturing PMI, U.S GDP for the last quarter of 2013, and EIA oil weekly update.

Here is a weekly outlook for the oil market for March 24th to 28th:

The difference between Brent and WTI oil sharply widened last week as it ranged between $5.48 and $10.46 per barrel. During the week, the premium rose by $3.26 per barrel.

The oil stockpiles slipped again by 0.5 MB and reached 1,728.75 million barrels. The linear correlation between the changes in stockpiles has remained stable at -0.207: this correlation implies that oil price, assuming all things equal, may continue to slowly recover next week. But in order to better understand the fundamentals let’s examine the changes in supply and demand:

Supply: Oil imports slipped by 0.4% last week. On the other hand, oil production inched up again by 0.2%; the total supply edged down by 0.1%;

Demand: Refinery inputs declined again by 0.4% last week. In total, the demand was lower than the supply, and the difference between supply and demand widened. This turn of events may eventually drag back down oil prices as the U.S oil market is moderately looser than it was last week. After all, the linear correlation between the weekly price of oil lagged by on period and the change in the gap between supply and demand is mid-strong and negative at -0.286.

The chart below presents the changes in the gap between supply and demand and the price of oil. 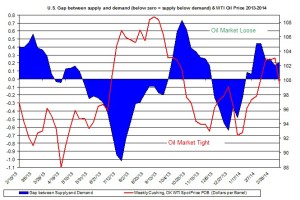 If U.S oil market loosens further, this could drag down oil price.

The next weekly report will be released on Wednesday, March 26th and will pertain to the week ending on March 21st.

Wednesday – U.S Core Durable Goods: This monthly report regarding February may indirectly indicate the changes in U.S. demand for commodities such as oil and gas. As of January 2014, new orders of manufactured durable goods decreased to $225 billion;

Thursday – Final U.S GDP 3Q 2013 Estimate: This will be the last estimate of U.S’s fourth quarter 2013 real GDP growth. In the previous estimate the U.S GDP rose by 2.4% in the fourth quarter of 2013. If the growth rate were to be revised down, this might negatively affect not oil prices;

From the supply side, the ongoing fall in imports is offsetting the modest gain in production resulted in an ongoing fall in oil supply. From the demand side, refinery inputs continue to descent. Further, the storage slipped. In total, the supply remained higher than demand and the gap between the two slightly expanded. This could suggest the oil market has slightly loosened. Looking forward, the upcoming reports regarding U.S and China could offer some insight regarding the progress in the demand for oil. The difference between Brent and WTI ranged between $5 and $10 and is likely to remain at this range.

The bottom line, on a weekly scale, Oil might change direction and slightly decline in the near future..