The price of crude oil (both WTI and Brent) resumed their downward trend and slightly declined during last week: WTI fell by 1.95%; Brent oil slipped by 1.04%. As a result, the gap between the Brent oil and WTI slightly expanded; the difference of Brent over WTI ranged between $7 and $8. Based on the latest EIA report, oil stockpiles rose again by 4.2Mb. Moreover, imports and refinery inputs increased during last week. Production slightly declined.  Will oil continue to fall next week? In the upcoming week, several publications and events may affect the oil market. These items include: China’s manufacturing PMI, U.S GDP, OPEC Summit and EIA oil weekly update.

Here is a weekly outlook and analysis for the crude oil market for May 27th to May 31st: 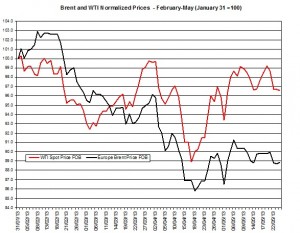 Premium of Brent over WTI – May

The difference between Brent oil and WTI spot oil slightly expanded to the range between $7 and $8 per barrel. During May, the premium declined by 4.71%. 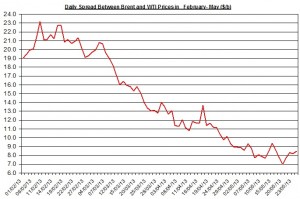 The oil stockpiles increased again by 4.2 MB and reached 1,802.2 million barrels. The linear correlation between the shifts in stockpiles has slightly weakened and reached -0.18: this correlation implies that the price of oil, assuming all things equal, will decline again during next week.

Oil imports to the U.S increased again by 1.8% last week. The weekly shifts in oil imports have a mid-strong negative relation (-0.316) that imply oil prices may further drop next week. Refinery inputs also rose last week while oil production slightly declined. In other words, the rise in imports and refinery inputs might suggest the oil market has slightly loosened in the U.S.

The next weekly update will be published on Wednesday, May 29th and will pertain to the week ending on May 24th.

The biannual OPEC summit will be held on May 31st in Vienna, Austria. In this summit the OPEC leaders will decide on OPEC’s oil production quota. If OPEC will change its quota, which currently stands on 30 million bbl/d, this could affect the global oil supply and consequently the price of oil.

Thursday – Second Estimate of U.S GDP 1Q 2013: In the previous estimate the U.S GDP rose by 2.5% in the first quarter – slightly lower than the rate many had expected; in the fourth quarter the GDP grew by 0.4% (annual terms);. If the growth rate in this upcoming estimate will rise above 2.5%, this could positively affect oil prices;

During last week, the EURO/USD rallied by 0.72%; on the other hand, the AUD/USD tumbled down by 1.84%. The correlations among these currencies pairs (AUD /USD) and oil prices contracted. E.g. the linear correlation between the price of oil and AUD /USD was 0.39 during April/May. If the U.S dollar will appreciate against “risk currencies”, this could pull down oil prices.

From the supply side, the increase in refinery inputs and imports in the U.S might adversary affect oil prices. Moreover, the ongoing buildup in storage is another indication for a rise in supply or a decline in demand, which could also suggest that oil market is loosening up in the U.S.  From the demand side, the upcoming reports regarding U.S GDP and China’s manufacturing PMI might provide an update to the expected changes from demand sides.  If the reports will show growth in China or U.S, they could pull up the prices of oil. The gap between Brent and WTI oil ranged between $7 and $8 and might resume its contraction in the coming weeks. The upcoming OPEC summit may stir up the oil market if OPEC will unexpectedly decide to lower its quota. Otherwise, the summit won’t have much effect on oil prices.  Finally, if major currencies such as the EURO and Aussie will depreciate against the U.S. dollar, they may drag down oil prices. The bottom line, I guess the prices of oil will further fall next week.