Here is a weekly outlook and analysis for the oil market for November 11th to November 15th:

In the chart below are the daily shifts in WTI and Brent oil rates during the past several months (prices are normalized to January 31st). As seen below, oil prices haven’t done much in recent weeks. 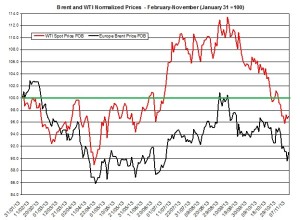 Premium of Brent over WTI – November

The gap between Brent and WTI oil contracted last week as it ranged between $9.26 and $11.96 per barrel. During the week, the premium declined by $0.78 per barrel. 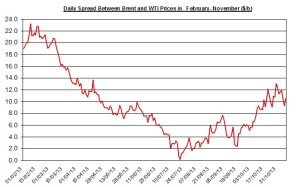 The oil stockpiles fell by 8.4 MB and reached 1,812.8 million barrels. The linear correlation between the shifts in stockpiles has remained stable at -0.205: this correlation suggests that oil price, assuming all things equal, may rise next week. But in order to better understand the fundamentals let’s examine the developments in supply and demand:

Demand: Refinery inputs rose by 0.3% last week. In total the demand remained lower than the supply; conversely, the difference has narrowed – this may eventually pressure up oil prices as the oil market in the U.S tightens.

The chart below shows the changes in the gap between supply and demand (below zero: Demand is above Supply; above zero: Supply is above Demand). 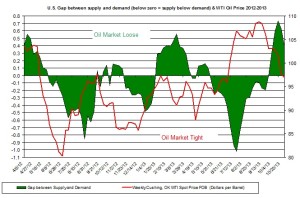 As seen above, the currently loose oil market in the U.S coincides with the drop of oil price. But if U.S oil market continues to tighten, as it did last week, this could eventually lead to a rise in oil price.

The next weekly report will be released on Wednesday, November 13th and will refer to the week ending on November 8th.

The OPEC will release its report on the main developments in crude oil and natural gas’s supply and demand worldwide; the report will also refer to the latest changes in the production of OPEC countries during October 2013;

The next report will be published on Tuesday, November 12th.

This upcoming monthly report will show an updated (for October) forecast and analysis for the global crude oil and natural gas market for 2013 and 2014.

The next report will be published on Thursday, November 14th.

The tensions in Syria continue but this news seems to have lost some steam so that its adverse effect on oil prices has diminished.  Conversely, Libya’s ongoing low oil exports, which are around 150k of barrels a day – in 2010 this country produced 1.6 million barrels a day, may keep oil prices elevated and perhaps further expand the gap between Brent and WTI.

Monday – China New Loans: This report will pertain to the recent changes in China’s new loans. According to the latest update, the total loans rose for the second consecutive month; this report is another indicator for China’s economic development;

Thursday –American Trade Balance: This monthly report for September will show the developments in imports and exports of goods and services to and from the U.S, such as commodities such as oil and gas; based on the previous American trade balance update regarding June the goods and services deficit expanded to $38.8 billion;

Friday –U.S Industrial Production: This report will present the monthly changes in the industrial production as of October; as of September, the production increased by 0.6%; this report may affect the USD currency;

From the supply side, the ongoing decline in imports led to the contraction in supply despite the slight rise in production. From the demand side, refinery inputs slightly increased. In total, the gap between supply and demand has shrank, which could suggest the oil market has tightened. Nonetheless, the gap is still high and the demand remains lower than the supply. Looking forward, the upcoming American and Chinese reports could offer some additional insight regarding the growth of these economies.  The gap between Brent and WTI may remain around the $9-$11 until new changes will develop in the Middle East regarding potential changes in supply. The fundamentals suggest oil prices may reach a start to pick up especially if the upcoming reports show growth and exceed expectations and if the oil market continues to tighten. Conversely, if the USD continues to rise, this could curb down ant gains to the price of oil.

The bottom line, on a weekly scale, I guess oil price (WTI) may start to pick up.