During the previous week, crude oil continued their descent, which coincided with the modest appreciation of the USD against the Euro and Aussie dollar. The oil stockpiles changed remained nearly unchanged. During last week, WTI oil declined by 1.65%; Brent oil, by 4.6%. The gap between the Brent oil and WTI narrowed: The difference between Brent and WTI ranged between $20 and $24. Will oil prices further decline next week? During the upcoming week there are several reports and events that may also affect the oil market. These news items include: U.S Presidential elections, U.S trade balance, OPEC monthly report, and EIA oil weekly report.

Here is a weekly outlook and analysis of the crude oil market for November 5th to 9th:

In the chart below are the developments in WTI and Brent oil prices during the month (prices are normalized to September 28th). As seen, the prices of oil have had a downward trend during recent weeks. 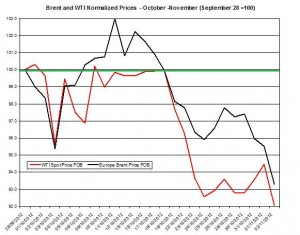 Premium of Brent over WTI – October/November 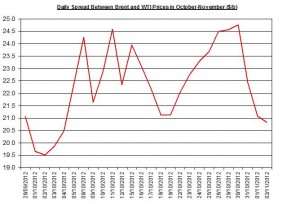 The oil stockpiles remained nearly unchanged during the previous week as it remained at 1,793 million barrels. The linear correlation between the changes in stockpiles tends to be negative: the linear correlation between the price of oil and the lagged by one week stockpiles is -0.188, this correlation suggests that the price of oil, assuming all things equal, will not move much next week. The upcoming report will be published on Wednesday, November 7th and will refer to the week ending on November 2nd.

The OPEC report will present the main shifts in crude oil and natural gas’s supply and demand worldwide; the report will also refer to the developments in the production of OPEC countries during October 2012; this news may affect oil prices (See here a summary of the previous September  report).

The next report will be published on Friday, November 9th.

Tuesday – U.S Presidential Elections: This news is likely to crowd out other news items and so the commodities markets might be working with low volume and high volatility on that day;

Tuesday – RBA – Cash Rate Statement: the overnight money market rate of Australia’s Reserve Bank declined by 0.25pp to 3.25%, which is the lowest level since the end of 2009. If the RBA will decide to cut the rate again, this news may affect the Australian dollar that is strongly linked with commodities prices;

Thursday –American Trade Balance: This monthly report for September will show the recent shifts in imports and exports of goods and services to and from the U.S, including commodities such as oil and natural gas; according to the previous American trade balance report regarding August the goods and services deficit rose during the month to $44.2 billion;

Friday –China Industrial Production: in the September report the index rose to 9.2%; if the index will continue to increase, it could indicate the Chinese economic activity is expanding;

The EURO/USD currency pair declined last week by 0.83%. This fall may have contributed to the drop in oil prices. Further, there are still positive correlation among these currencies pairs (AUD/USD) and oil prices. E.g. the linear correlation between the price of oil and AUD /USD was 0.46 during recent weeks. If the U.S dollar will further appreciate against the EURO and AUD, it may drag down oil prices.

Following the sharp drop in the prices of oil on Friday, there might a correction to such a sharp decline on the first day of the week. The gap between Brent and WTI oil declined last week and might continue to dwindle during next week. The East Coast of the U.S is slowing returning to the status quo following tropical storm Sandy. The upcoming Presidential elections are likely to pull up the volatility in the commodities markets. Oil stockpiles remained nearly unchanged last week, which could suggest that oil prices in the U.S will not move much next week. The upcoming reports including U.S trade balance and German and Chinese industrial production reports could affect oil rates. If these reports will show some progress, they could pull up oil prices. OPEC’s report could positively affect oil prices if the report will reveal a sizable drop in oil production. Finally, if major currencies including EURO and Aussie dollar will further decline against the U.S. dollar, then they may also drag down oil prices. The bottom line, I guess the prices of oil will continue to slowly dwindle on a weekly scale even thought they could zigzag throughout the week.

← Does The Rise of Gold Help the Profitability of Gold Producers?
Gold and Silver Prices Outlook for November 5-9 →