Oil prices (WTI and Brent) continued to tumble during last week: WTI fell by 2.94%; Brent oil, by 2.74%. As a result, the gap of Brent oil over WTI slightly widened: The premium ranged between $9.08 and $12.17. The EIA’s weekly update last week showed a rise in oil’s stockpiles by 3.7 million barrels and the oil market slightly loosened. Will oil continue to fall next week? This week, several reports may affect oil prices. These items include: FOMC statement, U.S retail sales, U.S and China’s manufacturing PMI reports, and EIA oil weekly reports.

Here is a weekly forecast and analysis for the oil market for October 28th to November 1st:

In the chart below are the daily changes in WTI and Brent oil rates during the past several months (prices are normalized to January 31st). As seen below, oil prices declined in recent weeks. 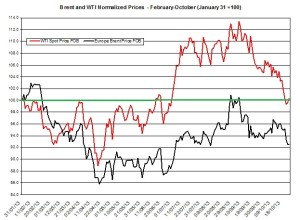 Premium of Brent over WTI – October

The gap between Brent and WTI oil expanded last week as it ranged between $9.08 and $12.17 per barrel. During the week, the premium slipped by $0.05 per barrel. 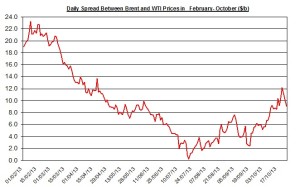 The oil stockpiles slightly rose again by 3.7 MB and reached 1,827.0 million barrels. The linear correlation between the shifts in stockpiles has remained stable at -0.20: this correlation implies that oil price, assuming all things equal, may decrease next week. But in order to better understand the developments in fundamentals let’s also look at the changes in supply and demand:

Demand: Refinery inputs sharply fell by 1.2% last week. In total the demand was much lower than the supply; furthermore, the difference has widened – this may pull down oil prices as the oil market in the U.S continues loosen. 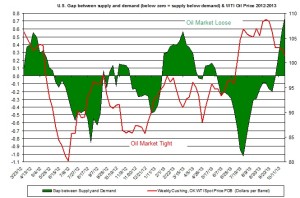 As seen above, the looser oil market in the U.S coincides with the drop of oil price.

The next weekly update will come out on Wednesday, October 25thand will pertain to the week ending on October 30th.

Tuesday –U.S. Retail Sales Report: In the latest report regarding August, the retail sales edged up by 0.2% from the previous month; gasoline stations sales remained flat in August; this report could signal the shifts in U.S’s gasoline demand and thus may affect U.S oil prices;

Wednesday – FOMC Meeting and Statement: The FOMC will decide whether it will taper QE3. This time, a press conference isn’t scheduled. Considering the recent U.S government shutdown and the little progress in the U.S labor market, it seems unlikely the FOMC will change its policy this time. If the Fed doesn’t change its monetary policy, gold and silver prices may continue their rally;

Friday – U.S. Manufacturing PMI: This report will refer to October 2013. In September, the index increased again to 56.2% – the highest level in two years; this means the manufacturing is growing at a faster rate; this index may affect crude oil markets;

Friday – China Manufacturing PMI: As of September, the Manufacturing PMI rose for fourth consecutive month to 51.1 – i.e. China’s manufacturing sectors are expanding at a slightly faster pace; in the last flash PMI report, the index rose to 50.9;

From the supply side, the drop in imports led to the contraction in supply despite the rise in production.  From the demand side, refinery inputs fell again. In total, the difference between supply and demand has sharply contracted, which could suggest the oil market has loosened. Moreover, the gap is also high compared to its state a few months back. Looking forward, the upcoming U.S and China’s reports could offer some additional information regarding the progress of these economies.  The FOMC meeting will take place this week and could affect not only the USD but also commodities prices. If the USD continues to fall, this could pressure up oil prices. The difference between Brent and WTI may remain around the $9-$12 until new developments will come to fruition in China from the demand side or Middle East and Libya from the supply side. Finally, the fundamentals suggest oil prices should slowly decline in the mid-term as long as there aren’t new headlines from Asia or Middle East.

The bottom line, on a weekly scale, I guess oil price (WTI) will continue to slowly decrease.