Despite Hurricane Isaac that caused a shut down in production in the Gulf of Mexico, there weren’t any substantial damages to oil infrastructure; therefore, on a weekly scale, crude oil prices didn’t move much. The difference between Brent and WTI slipped but remained in the near the $20 mark. During last week, WTI oil rose by 0.65%; Brent oil, by 0.28%.

During the upcoming week there are several reports and events that may affect the crude oil market such as: Australian GDP report for Q2, U.S non-farm payroll report, ECB rate decision, U.S manufacturing PMI.

Here is a weekly outlook and analysis of the crude oil market for September 3rd to 7th:

In the chart below are the changes in WTI and Brent oil prices during the month (prices are normalized to July 31st). It shows that both oil prices have had an upward trend during recent weeks. 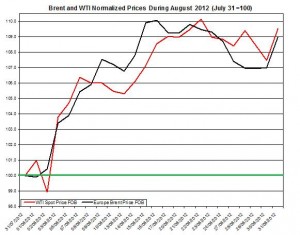 The difference between Brent oil and WTI spot oil declined a bit to the $17-$19 per barrel range. During August the premium rose by 6.27%. 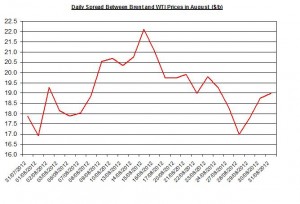 The oil stockpiles rose again during the previous week by 4.6 M bl to reach 1,797.3 million barrels. The upcoming report will be published on Thursday, September 6th and will refer to the week ending on August 31st.

Tuesday – U.S. ISM Manufacturing PMI: During July 2012 the index edged up to 49.8%, which means the manufacturing is still contracting; this index may affect forex, crude oil and natural gas markets;

Tuesday – Australian GDP Second Quarter 2012: In Q1 2012, the GDP expanded by 1.3% (seasonally adjusted). The slowdown in China’s growth might also adversely affect the growth of Australia’s GDP. Australia is among the leading countries in exporting commodities such as crude oil and metal ores; if the growth rate will dwindle it could affect the AUD (see here last report);

Thursday – ECB Press Conference and Euro Rate Decision: Since many EU countries are still struggling, ECB might decide to make another rate cut in the near future by another 0.25pp. If ECB will cut the rate again, it may affect the Euro;

Friday – U.S. Non-Farm Payroll Report: in the recent report for July, the labor market expanded by a higher than expected rate: the number of non-farm payroll employment increased by 163k; the U.S unemployment rate reached 8.3%; if the upcoming report will continue to show growth of above 120 thousand (in additional jobs), this may lower the chances of the Fed introducing additional stimulus plan in 2012; this report may affect not only the USD, but also commodities prices (see here my last review on the U.S employment report);

The EURO/USD currency pair rose last week by 0.53%; on the other hand, the AUD/USD declined by 0.8%. There are still positive correlation among these currencies pairs (EURO/USD, AUD/USD) and crude oil price. E.g. the linear correlation between the oil price and Euro/USD reached 0.71 during August. If the U.S dollar will further depreciate against the EURO and Aussie dollar, it may pull up oil prices.

The difference between Brent and WTI oil slightly shrunk during last week and may continue to dwindle during the upcoming week. Oil stockpiles rose last week and might suggest oil prices will decline during the week. The upcoming U.S reports including manufacturing PMI and non-farm payroll report could affect oil rates. Further, the upcoming ECB rate decision could pressure down crude oil prices if ECB will cut down again its interest rate. Finally, if major currencies including EURO and Aussie dollar will appreciate against the U.S. dollar, then they may pressure up oil prices.