Crude oil prices recorded sharp gains in recent weeks and October as a whole will be one of the best performing months of 2011 for crude oil prices.  The U.S. GDP rate reached a bigger than expected rate of 2.5% (Q-2-Q) and the EU agreement on the EU debt eased the concerns of the traders and helped the bullish market.  That being said, currently crude oil prices are traded slightly down. Today, Euro Area CPI will be published; Canada’s GDP; China Manufacturing PMI report; Bank of Australia Cash Rate Statement.

Here’s an outlook and analysis of the crude oil market for today, October 31st:

The chart below shows the development of WTI spot oil and Brent oil prices during August up to October. 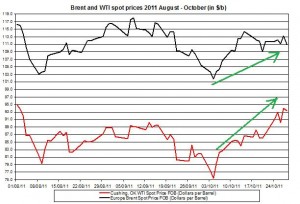 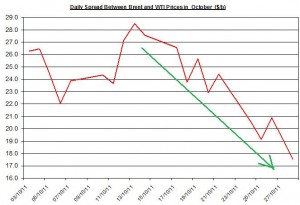 Japan stepped into the forex exchange rate markets again and caused a sharp depreciation of he YEN against the USD and other currencies in order to protect the county’s exporters.  This news may also be among the reasons for the sharp appreciation of the USD against other currencies and consequently could also be a partial explanation for the sharp falls in major commodities prices including crude oil prices.

Euro Area CPI: the inflation in Euro Area grew to 3.0% in September; if the upcoming report will show a rise in the inflation rate, it may further lower the chances of an ECB interest rate reduction;

Canada GDP: The GDP report will present the changes in major industrial sectors for August 2011, and may affect the CAD exchange rate and consequently major energy commodities prices.

China Manufacturing PMI: this index will cover 800 companies in 20 industries in China; this index indicates the growth in China’s manufacturing sectors and could influence crude oil traders;

Bank of Australia –Rate Statement: the overnight BOA interest rate of remained unchanged at 4.75% since November 2010;

The AUD/USD exchange rate slipped on Friday by 0.27%, after it had risen very sharply on Thursday. Furthermore, the USD also appreciated against other forex exchange rates including the Euro. If the U.S dollar will further appreciate against the risk currencies (AUD, CAD) this may also affect crude oil prices to drop.

If the American stock markets will continue their rally as they did in recent weeks, it may also contribute to the rises in crude oil prices (especially WTI oil price). 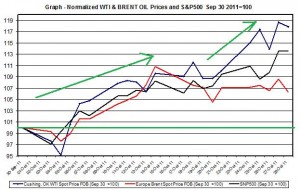 Major crude oil prices are currently traded slightly down in the European market:

The rally of crude oil prices in recent weeks coincided with the rally of the U.S. stock markets and probably with the renewed risk appetite in the financial community. That being said, there are still perils along the way for Europe in dealing with its debt crisis and the U.S. economy isn’t out of the woods vis-à-vis its economic slowdown. These factors could affect the price development of crude oil. The decline in the premium of Brent oil over WTI oil is probably related to the end of the Libyan war, the concerns of decline in crude oil demand in Europe and better than expected progress of US economy in Q3 2011 (GDP).