According to the recent petroleum and oil weekly update prepared by the Energy Information Administration, there is an analysis on the reasons for the recent hike in gasoline prices. Some of the reasons include the recent expectations of major central banks – including BOC, ECB and Federal Reserve – to issue stimulus plans, the tensions between Iran and the U.S – Iran is threatening to shut down Strait of Hormuz – refinery outages in the U.S.  During last week there was a decrease in the U.S stockpiles: the total U.S oil and petroleum stockpiles declined during last week by 4.5 million bl; further, crude oil stockpiles also dropped by 3.6 million bl. There was a rise in refinery inputs but a decline in production and imports. Finally, the prices of gasoline and diesel in the U.S rose again during last week.

Here is a weekly overview for the week ending on August 10th 2012 of the U.S oil and petroleum market:

The chart shows the changes of petroleum and oil stockpiles and WTI crude oil price between 2008 and 2012. During the last couple of years the lagged linear correlation between WTI oil price and current oil stockpiles was -0.173. 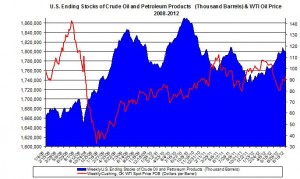 Below is a detailed review of the information listed above (for the week of August 10th):

Crude Oil, Gasoline and Diesel Prices for the Week Ending on August 10th

A detailed analysis of oil prices for the week ending on August 10th is herein.