Crude oil continued to trade down during the previous week. The news from the U.S showed the U.S economy isn’t expanding: U.S retail sales edged down in May; U.S CPI and PPI also declined. OECD oil inventories also increased while OPEC’s oil remained nearly unchanged; OPEC meeting was held last week in which it was decided to keep the production ceiling at 30.million bbl/d.

The oil stockpiles rose again during the previous week by 1.1 M bl.

Here is a short review for the price changes in oil (Brent and WTI) between June 11th and June 15th and a summary of the recent EIA petroleum and oil stockpiles weekly report:

NYMEX Oil Future (short term delivery) also slightly decreased by 0.08% during the week, and reached $84.03/b by Friday, June 15th.

Europe Brent oil sharply decreased during the week by 2.43% and the average price declined by 2.46% compared with previous week’s average.

The difference between Brent and WTI spot slightly closed during the week as it ranged between $13 and $15; its average premium reached $13.96; it finished the week at $13.19.

In the following charts (for the week ending on June 15th) are the daily changes in WTI spot oil, NYMEX Future (short term delivery) and Brent oil:

The first chart presents the shifts of WTI and Brent oil during last week: WTI oil rate has had a moderate downward trend during the week, while WTI remained nearly flat. 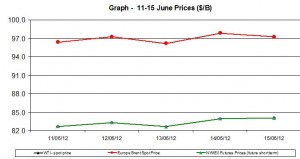 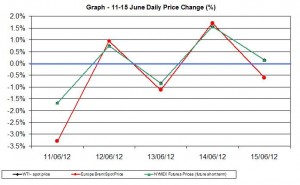 According to the recent EIA report on the U.S Petroleum and oil market, for the week ending on June 8th, U.S. Petroleum stockpiles increased by 1.1 million bl and reached 1,784.41 million barrels.