Crude oil prices continued to zigzag from gains to losses. The recent ECB rate cut by 25pp to 0.75% its lowest rate may have contributed to the decline in oil prices via the Euro/USD exchange rate. The disappointing U.S non-farm payroll report that showed a growth of only 80 thousand in June may have also dragged down not only the oil market but also other commodities such as natural gas and gold.

The oil stockpiles declined during the previous week by 4 M bl.

Here is a short review for the price changes in oil (Brent and WTI) between July 2nd and July 6th and a summary of the recent EIA petroleum and oil stockpiles weekly recap:

NYMEX Oil Future (short term delivery) also decreased by 0.6% during the week, and reached $84.45/b by Friday, July 6th.

Europe Brent oil on the other hand rose during the week by 1.24% and the average price increased by 6.54% compared with previous week’s average.

In the following charts (for the week ending on July 6th) are the daily changes in WTI spot oil, NYMEX Future (short term delivery) and Brent oil: 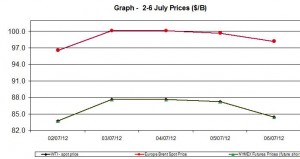 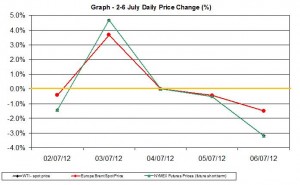 According to the recent EIA report on the U.S Petroleum and oil market, for the week ending on June 29th, U.S. Petroleum stockpiles declined by 4 million bl and reached 1,794.02 million barrels.