Crude oil prices didn’t do much during the first four days of the week only to hike on Friday on account of the recent EU Summit. . The EU leaders decided that struggling EU banks (including in Spain) will be bailed out by the EU rescue fund and so that countries won’t have to raise debt to bail their respective struggling banks.  This news pulled up the Euro along with commodities rates including oil.  Before Friday the U.S housing reports including new home sales and pending home sales came out positive; new orders of core durable goods also increased in May. But these reports didn’t pull up oil prices.

The oil stockpiles rose again during the previous week by 2.6 M bl.

Here is a short review for the price changes in oil (Brent and WTI) between June 25th and June 29th and a summary of the recent EIA petroleum and crude oil stockpiles weekly update:

Europe Brent oil spiked as well during the week by 7.34% and the average price increased by 0.43% compared with previous week’s average.

In the following charts (for the week ending on June 29th) are the daily changes in WTI spot oil, NYMEX Future (short term delivery) and Brent oil: 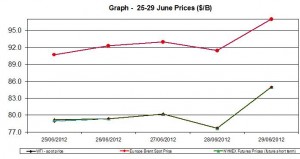 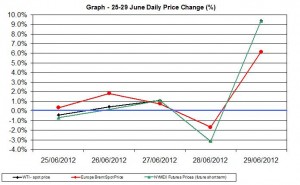 According to the recent EIA report on the U.S Petroleum and oil market, for the week ending on June 22nd, U.S. Petroleum stockpiles rose by 2.6 million bl and reached 1,798.094 million barrels.