Crude oil prices didn’t do much during most of the week despite the expectations that hurricane Isaac might have adversely affected the oil market in the U.S. The gap between Brent and WTI slightly shrunk again during last week. The oil stockpiles rose during last week by 4.6 M bl.  WTI oil rose by 0.65% during the week; Brent, by 0.28%. As a result, the gap between Brent and WTI reached $18.99/b on Friday.

Here is a short analysis for the price changes in oil (Brent and WTI) between August 27th and August 31st and a summary of the recent EIA review on petroleum and oil stockpiles:

Europe Brent oil also edged up during the week by 0.28% but the average price fell by 1.68% compared with previous week’s average.

The difference between Brent and WTI spot slightly declined during the week; the difference ranged between $17 and $19; its average premium reached $18.16; it finished the week at $18.99.

In the following charts (for the week ending on August 31st) are the daily shifts in WTI spot oil, NYMEX Future (short term delivery) and Brent oil: 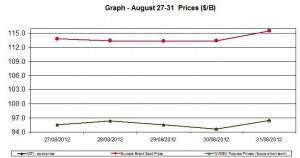 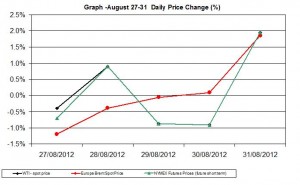 According to the recent EIA report on the American Petroleum and oil market, for the week ending on August 24th, U.S. Petroleum stockpiles rose by 3 million bl and reached 1,797.3 million barrels.